Dozens of police officers were deployed and fired at least two warning shots in the suburb of commercial capital Yangon after Buddhist nationalists besieged the area on the pretext of arresting illegal Muslims from Rakhine State, local media outlets reported.

Residents said a mob of over hundred led by Buddhist monks arrived by cars around 10:30 pm of Tuesday night and besieged the area before entering a Muslim home claiming illegal Bengalis (Muslims from conflict hit Rakhine State) are residing there. 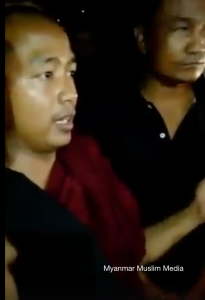 A local media reported that two Muslim pedestrians were admitted to hospital after they were beaten by nationalists. The mob also shouted at the Township police station. Muslims residents had gathered to confront the unlawful acts of the mob, some witnesses said.

This is the second anti-Muslim operation arranged by Buddhist extremists in fortnight in former capital Yangon.

On 28th of April, after a week-long systematic propagating and arranging, a mob including some Buddhist monks besieged Muslim major part of Tharkayta Township, Yangon and forced officials to seal off two Islamic religious schools on the pretext of holding services without permission. 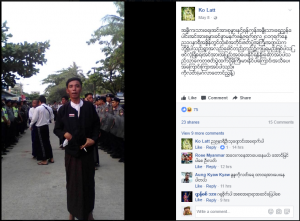 A nationalist from Mingalar Taung Nyunt Township gave a hint to start overnight anti-Muslim operation from his Facebook page.