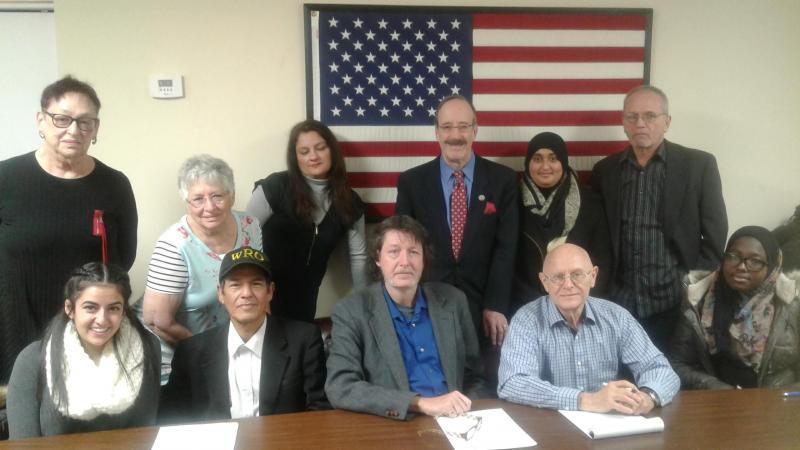 Today, February 13, 2018, Adem Carroll met with Congressman Eliot Engel, the sponsor of the House Sanctions Bill against Myanmar. They discussed the practicality of the United States government imposing full-fledged sanctions on the Myanmar government in response to the genocide the Myanmar military is carrying out on the Rohingya people.

a member of the steering committee for Concerned Citizens for Change.

They are a minority in Burma, and the government is using starvation, mass murder, rape, sexual slavery and theft of their property to exterminate as many Rohingya as possible while making it untenable for those Rohingyas who do manage to escape across the border to ever return.

As a result of the Burmese campaign of terror and ethnic cleansing, there are now hundreds of thousands of human beings stranded in refugee camps in Bangladesh, one of the poorest countries in the world which does not have the resources to adequately help these refugees. It is likely that epidemics will soon attack these camps because conditions in them are so lacking in the means necessary to provide a healthy environment.

Our delegation recognizes Congressman Engel as an ally in the struggle to save Rohingya lives. His concern for them was evident throughout our discussion. He has drafted a bill which will impose sanctions on Burma if it does not change course. Sadly, although the bill has bipartisan support, it faces an uphill struggle due to the present climate in Washington.

We want to thank Congressman Engel for his efforts. If this horror is to end, the role he is playing as the ranking member of the House Foreign Affairs Committee will have been invaluable.