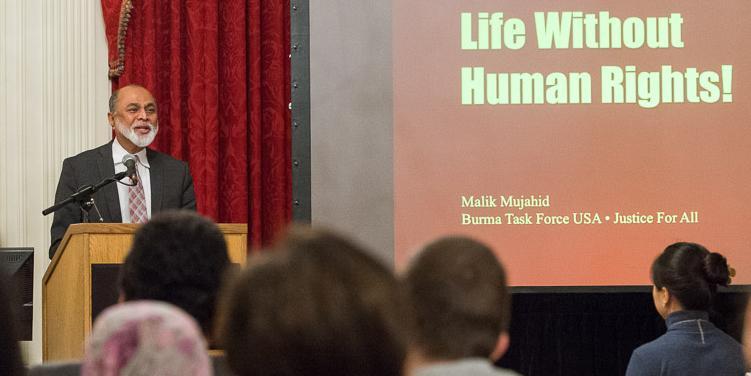 Burma’s Rohingya people are being slowly squeezed from their homeland by decades-long government policies that critics say deny them citizenship, health care, work, and schooling, with such tactics punctuated by killings, destroyed homes, and tens of thousands sent to camps.

That was the picture painted by Harvard scholars and Burmese activists who gathered in Cambridge to discuss what they described as the slow genocide of Burma’s Rohingya, a Muslim minority in the Buddhist-majority country that has endured a wide array of abuse at the hands of the former military government.

Though the international community has welcomed steps toward Burmese democracy in recent years, the situation for the Rohingya has improved little, speakers said Tuesday. The Rohingya, who have a long history in Burma, which is also known as Myanmar, remain a stateless people, denied citizenship and subject not just to official oppression, but also to violence from the local Rakhine people, as evidenced by the 2012 riots that displaced 90,000 inhabitants.

U.N. Still Trying To Figure Out If Mass Graves Filled With Rohingya Bodies Constitute A Genocide

(A MAN TAKES PHOTOS WITH A MOBILE PHONE OF THE DEAD BODIES IN YEBAWKYA VILLAGE,…

US Says ‘Deeply Troubled’ By Reports Of Myanmar Mass Graves