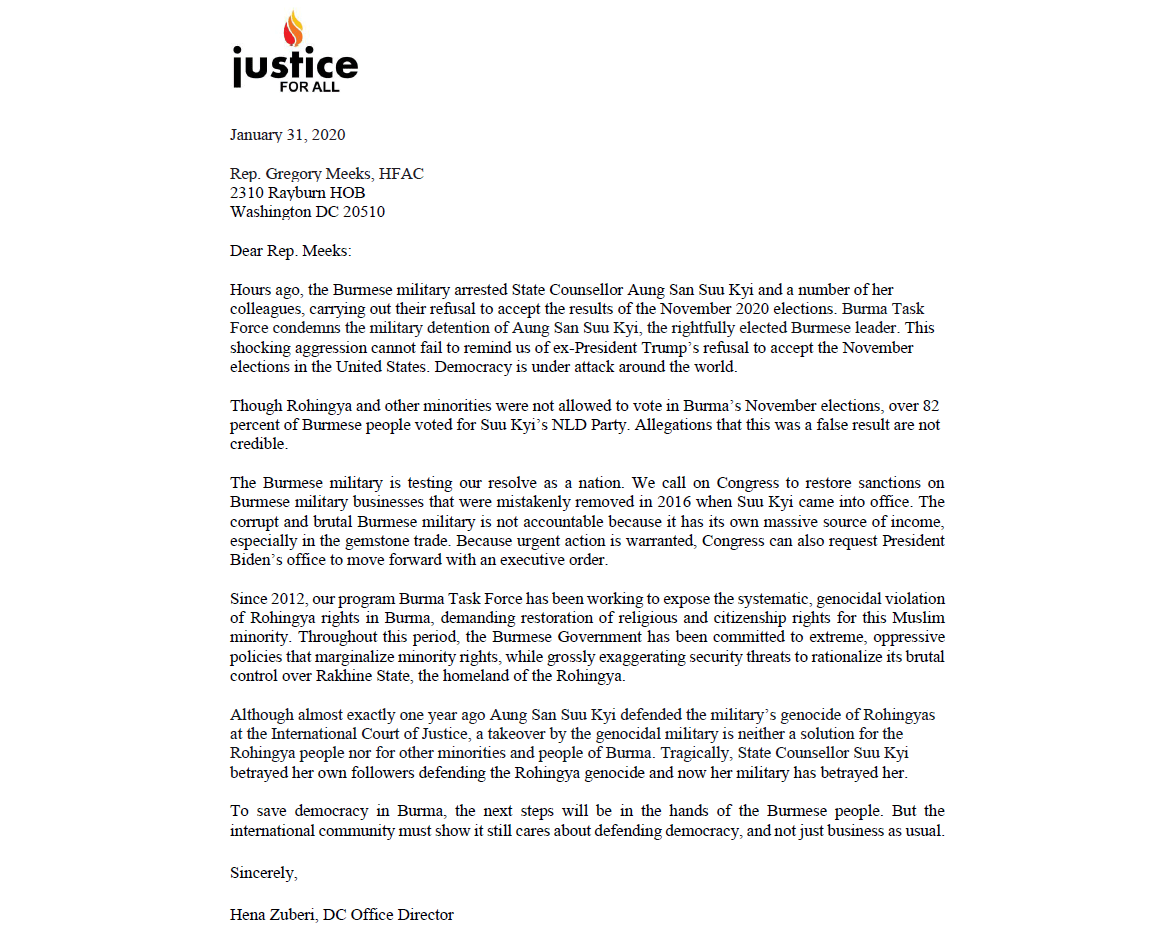 Hours ago, the Burmese military arrested State Counsellor Aung San Suu Kyi and a number of her colleagues, carrying out their refusal to accept the results of the November 2020 elections. Burma Task Force condemns the military detention of Aung San Suu Kyi, the rightfully elected Burmese leader. This shocking aggression cannot fail to remind us of ex-President Trump’s refusal to accept the November elections in the United States. Democracy is under attack around the world.

Though Rohingya and other minorities were not allowed to vote in Burma’s November elections, over 82 percent of Burmese people voted for Suu Kyi’s NLD Party. Allegations that this was a false result are not credible.

The Burmese military is testing our resolve as a nation. We call on Congress to restore sanctions on Burmese military businesses that were mistakenly removed in 2016 when Suu Kyi came into office. The corrupt and brutal Burmese military is not accountable because it has its own massive source of income, especially in the gemstone trade. Because urgent action is warranted, Congress can also request President Biden’s office to move forward with an executive order.

Since 2012, our program Burma Task Force has been working to expose the systematic, genocidal violation of Rohingya rights in Burma, demanding restoration of religious and citizenship rights for this Muslim minority. Throughout this period, the Burmese Government has been committed to extreme, oppressive policies that marginalize minority rights, while grossly exaggerating security threats to rationalize its brutal control over Rakhine State, the homeland of the Rohingya.

Although almost exactly one year ago Aung San Suu Kyi defended the military’s genocide of Rohingyas at the International Court of Justice, a takeover by the genocidal military is neither a solution for the Rohingya people nor for other minorities and people of Burma. Tragically, State Counsellor Suu Kyi betrayed her own followers defending the Rohingya genocide and now her military has betrayed her.

To save democracy in Burma, the next steps will be in the hands of the Burmese people. But the international community must show it still cares about defending democracy, and not just business as usual. Sincerely, Hena Zuberi, DC Office Director Adem Carroll, UN & New York Office Director Burma Task Force/Justice for All www.justiceforall.org An NGO with Consultative Status at the United Nations (Department of Global Communications), Justice for All is nonprofit organization based in the United States. We seek to promote a culture of human rights and to promote grassroots empowerment.