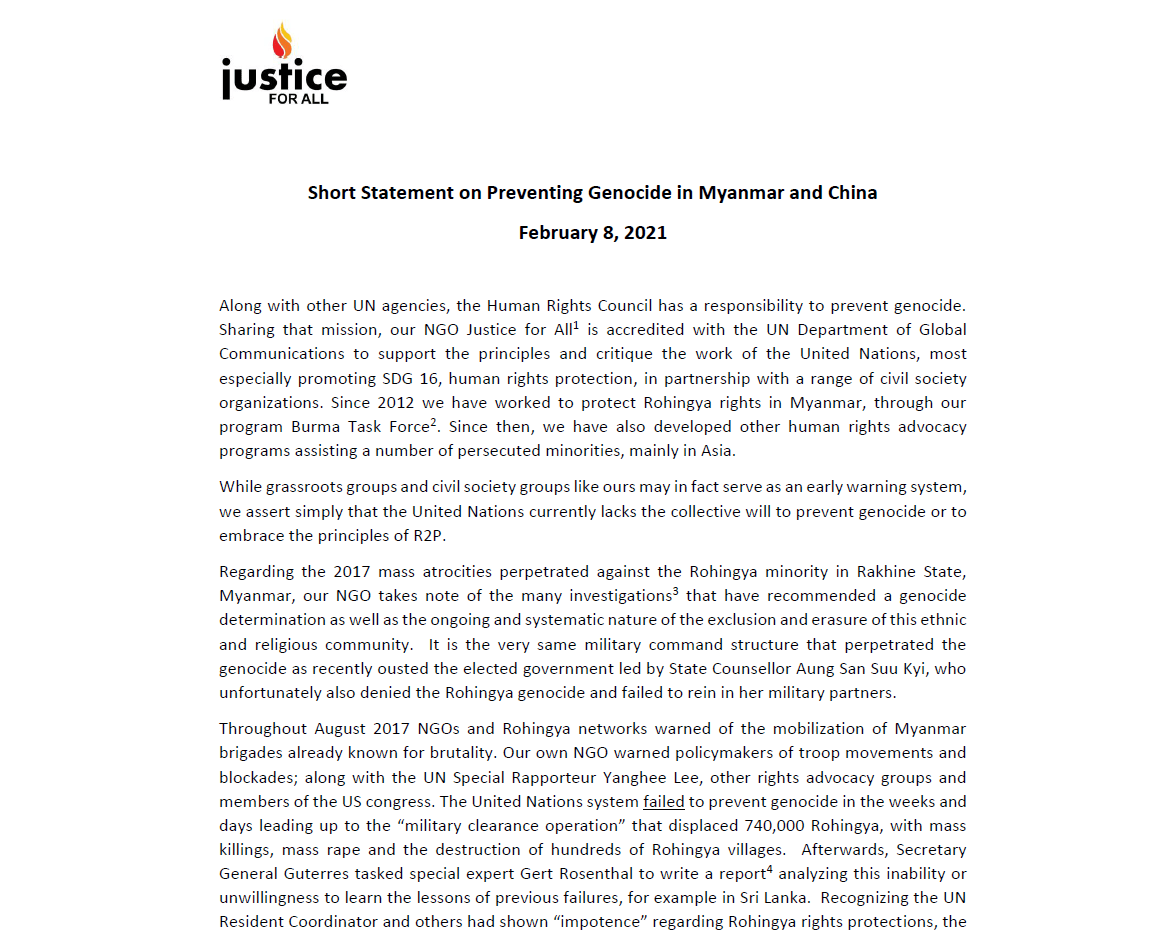 Short Statement on Preventing Genocide in Myanmar and China

Along with other UN agencies, the Human Rights Council has a responsibility to prevent genocide. Sharing that mission, our NGO Justice for All1 is accredited with the UN Department of Global Communications to support the principles and critique the work of the United Nations, most especially promoting SDG 16, human rights protection, in partnership with a range of civil society organizations. Since 2012 we have worked to protect Rohingya rights in Myanmar, through our program Burma Task Force2. Since then, we have also developed other human rights advocacy programs assisting a number of persecuted minorities, mainly in Asia.

While grassroots groups and civil society groups like ours may in fact serve as an early warning system, we assert simply that the United Nations currently lacks the collective will to prevent genocide or to embrace the principles of R2P.

Regarding the 2017 mass atrocities perpetrated against the Rohingya minority in Rakhine State, Myanmar, our NGO takes note of the many investigations3 that have recommended a genocide determination as well as the ongoing and systematic nature of the exclusion and erasure of this ethnic and religious community. It is the very same military command structure that perpetrated the genocide as recently ousted the elected government led by State Counsellor Aung San Suu Kyi, who unfortunately also denied the Rohingya genocide and failed to rein in her military partners.

Throughout August 2017 NGOs and Rohingya networks warned of the mobilization of Myanmar brigades already known for brutality. Our own NGO warned policymakers of troop movements and blockades; along with the UN Special Rapporteur Yanghee Lee, other rights advocacy groups and members of the US congress. The United Nations system failed to prevent genocide in the weeks and days leading up to the “military clearance operation” that displaced 740,000 Rohingya, with mass killings, mass rape and the destruction of hundreds of Rohingya villages. Afterwards, Secretary General Guterres tasked special expert Gert Rosenthal to write a report4 analyzing this inability or unwillingness to learn the lessons of previous failures, for example in Sri Lanka. Recognizing the UN Resident Coordinator and others had shown “impotence” regarding Rohingya rights protections, the report made it quite clear that early warning systems alone will not work if no one has the political will to act.

This finding remains a serious concern. Not only does the UN Security Council fail to act appropriately to address the current coup in Myanmar, but the threat of a Chinese veto has prevented meaningful punitive action such as an arms embargo, or sanctions on military owned businesses, as recommended by the UN Fact Finding Mission. Impunity for the Myanmar military weakens any hope

to prevent future genocides. Only the cases in the International Criminal Court and International Court of Justice offer the traumatized Rohingya people any hope of justice in the long run. Meanwhile, donor nations will struggle to continue funding the enormous refugee camps in Bangladesh, where refugee access to employment and education remains severely restricted.

Through our program Save Uighur5, Justice for All also works in consultation with the Uighur community to raise awareness of the extreme oppression and erasure of that minority in Xinjiang, China. Some of our program staff have multiple family members detained with millions of Uighurs in forced labor camps, some of whom have died. Experts increasingly refer to this systematic oppression as Genocidal6. Yet here again we can see a clear reluctance to act on the part of the international community. The influence of the Chinese Communist Party among its neighbors and at the United Nations evidently intimidates many member nations into supporting extreme policies in the name of national security. This willful failure brings multilateralism itself into question and weakens the ability of the institution to prevent war crimes, crimes against humanity and genocide.

To strengthen capacities to prevent genocide, strengthen political will. There must be a political cost imposed when UN member nations fail to prioritize human rights protection. The Code of Conduct supported by the majority of UNGA members should be actively promoted to stop the P5 from preventing meaningful response to mass atrocities. Moreover, certain nations should not be permitted to exclude other nations from even joining the UN system—of course we allude here to the exclusion of Taiwan.

Finally, we must question the culture of diplomacy itself that talks in circles and evades responsibility. Member nations should avoid theatrics but speak honestly. UN agencies must also be honest in their reporting, which has come to resemble corporate PR. Because they fear being ousted from host countries, UN humanitarian agencies avoid publicly addressing serious rights concerns. Avoiding clarity will not serve us well.

3 For example, FFM and PILPG

Rohinygas and the Pledge of “Never Again”
Let Rohingya Learn