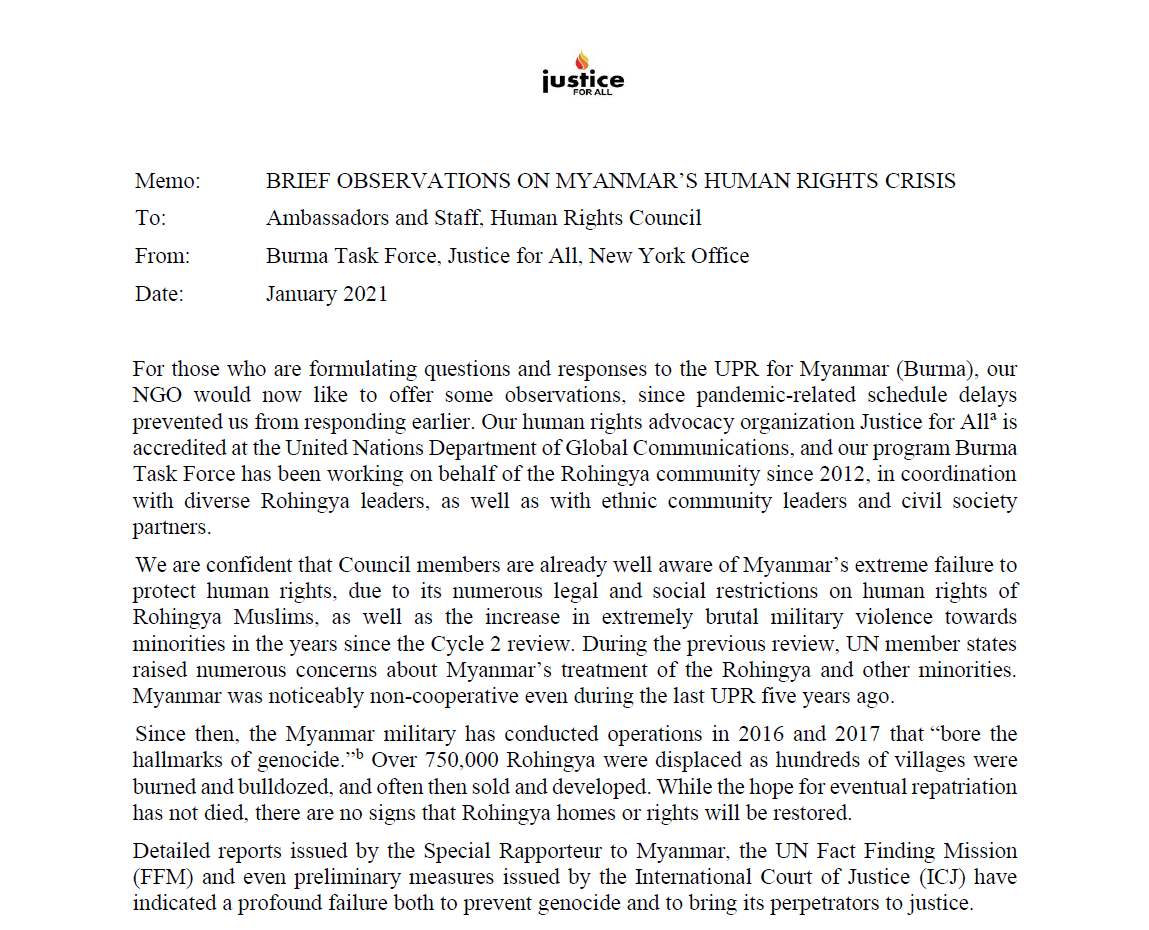 From: Burma Task Force, Justice for All, New York Office

For those who are formulating questions and responses to the UPR for Myanmar (Burma), our NGO would now like to offer some observations, since pandemic-related schedule delays prevented us from responding earlier. Our human rights advocacy organization Justice for Alla is accredited at the United Nations Department of Global Communications, and our program Burma Task Force has been working on behalf of the Rohingya community since 2012, in coordination with diverse Rohingya leaders, as well as with ethnic community leaders and civil society partners.
We are confident that Council members are already well aware of Myanmar’s extreme failure to protect human rights, due to its numerous legal and social restrictions on human rights of Rohingya Muslims, as well as the increase in extremely brutal military violence towards minorities in the years since the Cycle 2 review. During the previous review, UN member states raised numerous concerns about Myanmar’s treatment of the Rohingya and other minorities. Myanmar was noticeably non-cooperative even during the last UPR five years ago.
Since then, the Myanmar military has conducted operations in 2016 and 2017 that “bore the hallmarks of genocide.”b Over 750,000 Rohingya were displaced as hundreds of villages were burned and bulldozed, and often then sold and developed. While the hope for eventual repatriation has not died, there are no signs that Rohingya homes or rights will be restored.
Detailed reports issued by the Special Rapporteur to Myanmar, the UN Fact Finding Mission (FFM) and even preliminary measures issued by the International Court of Justice (ICJ) have indicated a profound failure both to prevent genocide and to bring its perpetrators to justice.
The current government not only rejects allegations of genocide, but also continues to deny the very existence of the Rohingya as an ethnic group in its territory. Our recent reportc to the Special Rapporteur on Freedom of Religion or Belief details how Myanmar’s sustained Islamophobic policies continue to target and marginalize vulnerable minorities.

Despite the U.N. Secretary-General’s call for a global ceasefire during the pandemic,d the Burmese military has continued hostilities in Rakhine State, with Rohingya and Rakhine civilian deaths and disappearances continuing.e We link heref to our five reports written to monitor compliance around the ICJ rulings in January 2020. The reports indicate a pattern of state terror targeting the civilian populations, mainly in Rakhine State but spilling over into Chin State and beyond. The Karen and Kachin populations also suffer from displacement.
The Burmese government ignored recommendations in the 2015 Working Group Report to allow humanitarian access in Rakhine State and since then has refused to allow investigators including the Special Rapporteur to Myanmar Yanghee Lee to enter its borders. After a period of nationalist harassment, few international agencies have had any access to Rakhine State.
Over 500,000 Rohingya remain, suffering from harsh, unsafe conditions with extremely limited access to healthcare, food, and education. Moreover, at least 100,000 Rohingya and Kaman have been confined to internal displacement (IDP) camps since outbreaks of violence in 2012.g People in these camps suffer from a higher risk of COVID-19 infection due to limited access to basic essential and life-saving services.h A mobile internet shutdown ongoing since June 2019 in half of Rakhine State has dramatically reduced access to healthcare and pandemic safety.i
Throughout Myanmar, many ethnic communities exist in a state of conflict with the Burmese military and maintain their own militias. In Rakhine State, the Arakan Army (AA) claims to represent the interests of Rakhine Buddhists. However, in 2016 a very much smaller militia (ARSA) that claims to represent Rohingya Muslims was vilified as a terror organization and has been made a pretext for the vastly disproportionate “clearance operations” disrupting much of Rohingya life and society.

However, mass atrocities are not random incidents of soldiers using disproportionate force, as Myanmar State Counsellor Aung San Suu Kyi suggested in 2020 while defending the military at the ICJ.j The systematic and premeditated nature of military’s extreme brutality cannot be denied, including the murder of children and widespread mass rape and other atrocities. Nor is it possible to deny the impunity for perpetrators of genocide and war crimes. Even after a small number of Burmese soldiers were arrested for war crimes perpetrated in the village of Tula Toli, they were released. The military resists oversight by the civilian government and operates independently, with its own extensive and too often illicit sources of income.
During its time in operation, Myanmar’s own Independent Commission of Enquiry (ICOE) lacked judicial independence, mischaracterizing the Burmese military’s brutal attacks as isolated instances, and denying the systematic rape of Rohingya women, according to the Executive Summary of its final report. The full report has never been released publicly.
The Burmese military and government have systematically restricted Rohingya movement, voting and marriage rights, access to health care, education, and employment while subjecting them to arbitrary violence and arrest. According to a 2018 survey, 99.6 percent of the 495 Rohingya respondents reported that they faced travel restrictions when traveling within Myanmar.k These restrictions have continuedl during the pandemic, while punishments for violating social distancing regulations are imposed unequally.
Despite widespread corruption, lack of transparency, poverty and landgrabs affecting vulnerable communities around Myanmar, one of the deepest roots of the human rights crisis is the deliberate denial of Rohingya citizenship rights. The 1982 National Citizenship Law has led to a series of bureaucratic systems that restrict citizenship though a confusing and changing set of requirements. Confiscation and destruction of previous cards has only deepened the chaos.

1. Immediately halt all attacks against civilian populations and implement reforms of security forces, the Border Guard Police, and the justice sector. Initiate a process of transitional justice in which minority communities play a central role. Allow the Rohingya and its leadership to join other ethnicities in the national peace process.
2. Recognize the Rohingya people as a “national race” under the 2008 Constitution. Restore full citizenship rights to the Rohingya. Eliminate requirements for citizenship that discriminate on the basis of race, religion, ethnicity, or any other protected status. Issue birth certificates and citizenship to every child born in Myanmar. Children of Myanmar citizens who fled Myanmar due to persecution should be granted citizenship upon birth.
3. Respect the principle of non-refoulement of Rohingya refugees to Myanmar, where they continue to face a well-founded fear of being persecuted. Return and resettle displaced persons in a voluntary, safe, and dignified manner in accordance with international standards, returning land and other property to its original owner and providing fair compensation for loss or damage. Establish an independent institution to arbitrate land and property disputes.
4. Cooperate with the investigations of the ICC, the ICJ and the Independent Investigative Mechanism for Myanmar (IIMM). Allow the OHCHR to establish an office in Myanmar.
5. Ensure access to health care, education, and economic opportunity for all. Ensure election laws and regulations clearly recognize the Rohingya right to vote and run for office.

We hope that Myanmar will be able to demonstrate compliance with these recommendations, which would benefit all its people rather than a small number of military cronies. Democracy cannot exist without respect for pluralism and minority rights. Until the Human Rights Council is able to ensure compliance, it will continue to lose credibility. As authoritarian, nationalist, and corrupt regimes seek to “game the system” in order to extract short-term profit, our shared struggle to protect human rights is essential to keep the founding principles of the UN system alive. We are all in this together.

Rohinygas and the Pledge of “Never Again”
Let Rohingya Learn