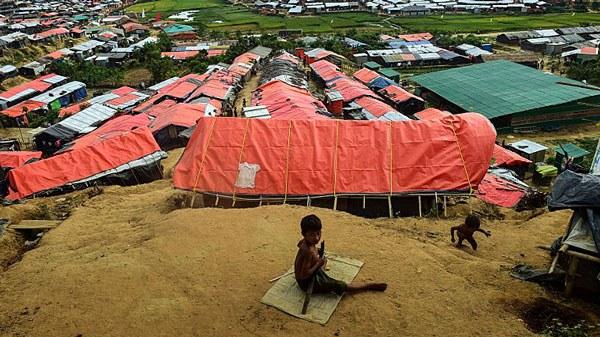 Rohingya leaders have called on the United States and other members of the international community to ensure that refugees from the Muslim minority who fled a military crackdown in Myanmar’s northern Rakhine state to neighboring Bangladesh not be forced to return to the Southeast Asian country unless officials can guarantee their security and restore their citizenship.

The Myanmar military launched a brutal crackdown targeting the Rohingya in response to deadly terrorist attacks by a Muslim militant group in August 2017. The Rohingya endured killings, arson, rape, and torture during the campaign, which forced about 655,000 of them to flee to safety in Bangladesh.

“Rohingyas must not be sent back to the genocide zones of Burma without security and citizenship,” said Abdul Malik Mujahid, chairman of Burma Task Force USA, a coalition of 19 U.S. and Canadian Muslim organizations dedicated to advocating for the Rohingya and ending genocide in Myanmar.

He was one of several Rohingya leaders from across the U.S. who participated in a panel discussion in Washington, D.C., on the situation in northern Rakhine state and were part of a delegation that met on Capitol Hill.

He said that a relative told him how Myanmar army soldiers and ethnic Rakhine mobs attacked Rohingya villages during the crackdown.

“My sister saw with her own eyes in her village that the Myanmar army and [ethnic] Rakhine extremists set fires and killed people,” Saw Hlaing said. “The village’s name is Vasala in the Rohingya language.”

The Myanmar government and army have denied allegations of atrocities committed by soldiers against the Rohingya, even though both the United Nations and United States say the crackdown amounts to ethnic cleansing.

Myanmar and Bangladesh signed an agreement in November to repatriate Rohingya refugees who wished to voluntarily return to Myanmar and who could prove prior residency there.

Myanmar is in the process of issuing the Rohingya national verification cards as part of a citizenship eligibility process for undocumented people in Rakhine state.

Kyaw Soe Aung, executive director of the Rohingya American Society, said that the Rohingya community rejects the cards because all Rohingya who live in Myanmar have other forms of identification and official lists documenting all family members

“We would like to ask the Myanmar government to determine citizenship according to these documents,” he said.

Myanmar’s 1982 Citizenship Law denies the Rohingya citizenship because they are not among the country’s 135 official ethnic groups.

He suggested that the government accept the Rohingya refugees back, help them resettle since most of their villages and homes were burned during the crackdown, and give them back their rights.

“If this is done, the problems in Rakhine state will disappear,” he said.

Myanmar plans to begin repatriating about 100,000 Rohingya refugees on Jan. 22, though rights groups, the U.N., and Rohingya leaders themselves have warned against a hasty return, saying that the Rohingya may not be able to produce documents proving prior residency since many fled in haste to escape violence by security forces.

They also have cautioned that Rohingya who return will continue to face repression and discrimination in Buddhist-majority Myanmar, where they are considered illegal immigrants from Bangladesh and are denied citizenship and access to basic services.

The plan that Myanmar and Bangladesh have come up with does not take into account the rights of the returning Rohingya, Kyaw Soe Aung said.

“The agreement said Myanmar will accept those who have documents or evidence that shows that they previously lived in Rakhine state before,” he said. “Most of them don’t have any documents or evidence because the Myanmar army and security guards burned their houses, and they had to flee to Bangladesh.”

Myanmar officials, however, say they have documents to verify the residency of Rohingya who want to return but no longer possess official papers.

“The Myanmar government has to receive the Rohingya back by checking its immigration data and giving them their full rights,” Kyaw Soe Aung said.

Kyaw Soe Aung also said the Myanmar government must implement the recommendations of the Advisory Commission on Rakhine State, a body led by former U.N. head Kofi Annan which called for reviews of the country’s Citizenship Law and for an end to restrictions on the Rohingya to prevent further violence in the region.

“I completely accept the suggestions in his report,” he said. “If Daw [honorific] Aung San Suu Kyi’s government and military can implement the Annan commission’s suggestions, the problems in Rakhine State will be resolved, I believe.”