Diasporas can play a significant role in the development and politics of their countries of origin.

Researchers have established that diasporas improve the lives of their home communities by maintaining cultural links, raising awareness, sharing information and sending remittances back home to family and friends. However, diasporas are sometimes painted in an unfavourable manner because they might exacerbate or escalate conflict in their homelands.

In the case of the Rohingya diaspora, many are making positive strides towards peace in their homeland of Myanmar, formerly Burma. Rohingya are an Indigenous people from Rakhine State in northwestern Myanmar. Since 1962, the outset of Gen. Ne Win’s military dictatorship, the Rohingya people have been the target of increased institutionalized discrimination. Since 1982, Myanmar officially stopped recognizing the Rohingya as one of the country’s 135 official ethnic groups under their new citizenship law.

Although the democratization process in Myanmar began in 2011, ostensibly ending years of military dictatorship, that time period also saw a renewal of violence between the military and ethno-religious minority groups, particularly the Rohingya people. The violence peaked in August 2017.

On Aug. 25 of that year, the Arakan Rohingya Salvation Army, a small insurgent group also known as ARSA, attacked military bases and security force outposts across Rakhine State. The military retaliated by conducting clearance operations, forcing more than 725,000 people to cross the border into Bangladesh. Hundreds were also killed.

The 2018 report by the Independent International Fact-Finding Mission on Myanmar (IIFFMM) stated that the military justified using violence against Rohingya as a means to protect the rest of the country. 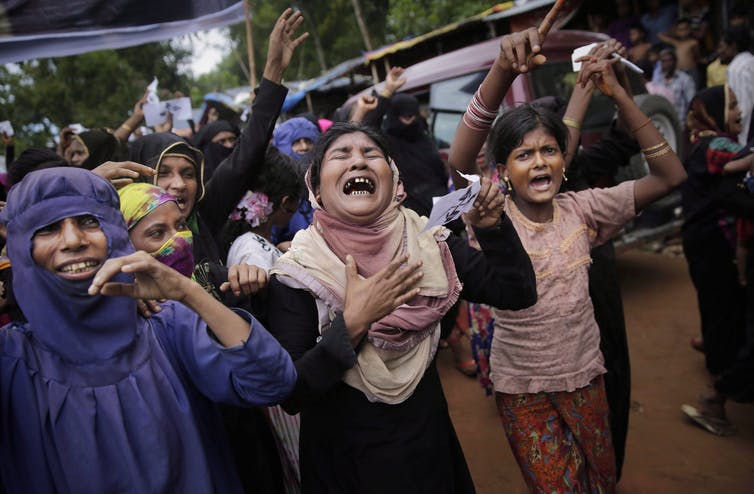 Rohingya women cry during a protest rally to commemorate the first anniversary of Myanmar army’s crackdown which lead to a mass exodus of Rohingya Muslims to Bangladesh, at Kutupalong refugee camp in Bangladesh, on Aug. 25, 2018. THE CANADIAN PRESS/AP, Altaf Qadri

However, this violence is not a two-sided conflict, it is a state crime. The IIFFMM report concluded that Myanmar’s commander-in-chief, Senior General Min Aung Hlaing, and his top military leaders should be investigated and prosecuted for genocide, crimes against humanity and war crimes.

As a result of the decades-long violence, most of the surviving Rohingya now live in diaspora, with the largest population located in refugee camps in Cox’s Bazar, Bangladesh.

Other Rohingya diaspora communities are situated around the world in countries that include Canada, Ireland, Saudi Arabia, Australia, the United Kingdom and the United States. In 2006, Canada became the first country to officially resettle Rohingya refugees from Cox’s Bazar, and a number of Rohingya newcomers settled in the Kitchener-Waterloo region of Ontario.

Over the past decade, these members of the Rohingya diaspora have advocated tirelessly for the Canadian government to endorse the findings of the IIFFMM report, which the House of Commons unanimously voted in favour of in September 2018. The government of Canada has also committed $300 million over the next three years to respond to the situation in the refugee camps and to work towards a political solution in Myanmar. 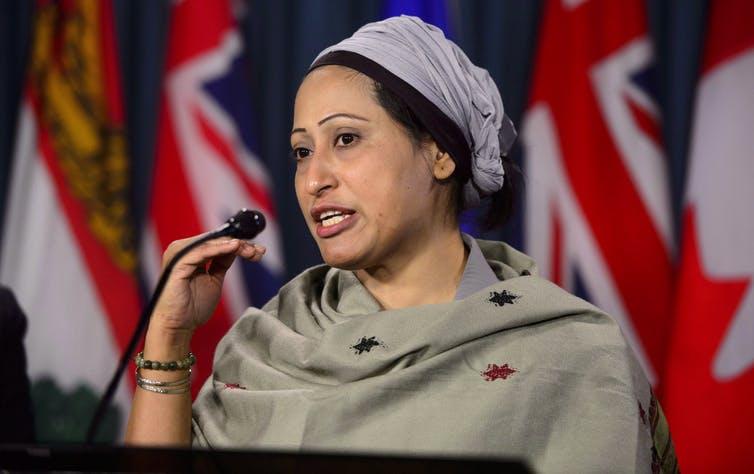 Razia Sultana, a Rohingya lawyer, human rights advocate and researcher, speaks during a news conference on Parliament Hill in Ottawa in September 2018. THE CANADIAN PRESS/Sean Kilpatrick

Over the past decade, these members of the Rohingya diaspora have advocated tirelessly for the Canadian government to endorse the findings of the IIFFMM report, which the House of Commons unanimously voted in favour of in September 2018. The government of Canada has also committed $300 million over the next three years to respond to the situation in the refugee camps and to work towards a political solution in Myanmar.

As a migration academic, I spoke with a researcher based in Cox’s Bazar about the role the Rohingya diaspora can play in mitigating the refugee crisis in Bangladesh and resolving the conflict. 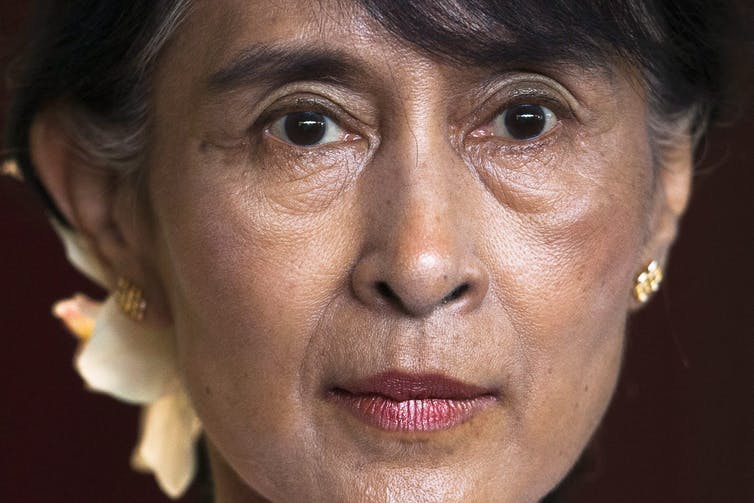 He explained that diaspora communities have political savvy and extensive “lay of the land” that’s helpful when engaging with people in power. He added that diaspora can also provide resources, time, capital and capacity into the refugee camps, which they would not have access to if they were still in Myanmar.

Members of the Rohingya diaspora in Canada are keen to participate in resolving the crisis on their own terms. The Canadian Rohingya diaspora regularly convenes meetings, public awareness-raising events and academic seminars about the genocide in Myanmar. Youth members of the community have even organized a play and a documentary that highlight the story of their families’ displacement from Myanmar to Bangladesh and finally to Canada.

In February 2019, several Rohingya activists from Canada presented at the International Conference on Protection and Accountability in Burma at Barnard College, Columbia University.

In April 2019, the Canadian Rohingya Development Initiative (CRDI) and Burma Task Force (BTF) convened a round-table discussion with former Ontario premier Bob Rae, special envoy to Myanmar, along with lawyers, academics, activists and representatives from NGOs to discuss the progress made in the year since Rae’s report on the situation in Myanmar was released.

“What we are trying to achieve will not happen overnight but will require hard work, commitment and perseverance. We look to the Rohingya genocide victims, particularly the youth, as our role models. They show resilience and courage in the face of this devastating situation. We owe them the possibility to make a vibrant community. The youth who are studying here, they will have good leadership skills, they can be leaders of Canadian society. Not just in Canada, but around the world.”

The global Rohingya diaspora will continue to advocate for peace in Myanmar.

Equipped with rights, knowledge and skills, they are poised to be influential against the genocidal regime that seeks to erase their people. They will continue to be engaged even when the international community moves on to the next crisis, when governments change winds and when the news cycle has forgotten their cause.