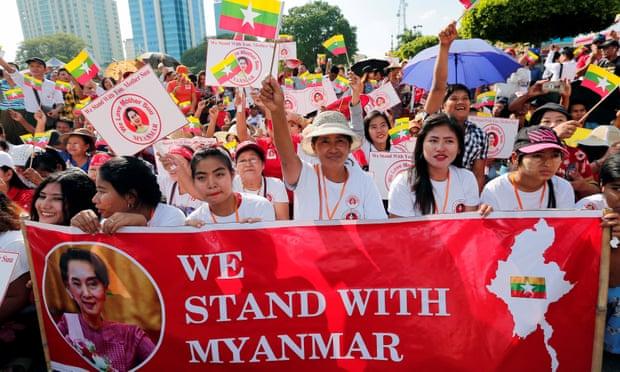 A momentous legal confrontation will take place at the UN’s highest court on Tuesday when the Nobel peace prize winner Aung San Suu Kyi appears in person to defend Myanmar against accusations of genocide.

Once internationally feted as a human rights champion, Myanmar’s state counsellor is scheduled to lead a delegation to the international court of justice (ICJ) in The Hague.

The claim that Myanmar’s military carried out mass murder, rape and destruction of Rohingya Muslim communities has been brought by the Gambia, a west African state that belongs to the Organisation of Islamic Cooperation.

The contrast is repeatedly drawn between Aung San Suu Kyi’s 1991 peace prize win and 15 years spent under house arrest, and her present position as chief denier that any ethnic violence has been perpetrated against the Rohingya. Last year, the US Holocaust Memorial Museum revoked her Elie Wiesel award.

Security around the court is expected to be tight. There has been speculation that undisclosed arrest warrants may have been issued in relation to other legal proceedings against Myanmar. Aung San Suu Kyi, as effective head of government, is likely to be able to claim immunity from arrest.

Aung San Suu Kyi left Yangon airport on Sunday bound for the Netherlands, where Rohingya supporters said they were planning protests outside court. The US-based Abdul Malik Mujahid, chair of the Burma Task Force, said there would be demonstrations near the Peace Palace on Tuesday and Wednesday.

“This is the last chance for her to restore her international stature,” Mujahid said. “The best thing she could say would be to admit that crimes have been committed and [that she will] cooperate. Evidence of genocide should be preserved, the Rohingya should have their citizenship restored and be allowed to return.”

Under the rules of the ICJ, member states can bring actions against fellow member states over disputes alleging breaches of international law – in this case, the 1948 convention on the prevention and punishment of the crime of genocide.

It is not the first time the tribunal, also known as the world court, has considered genocide cases – it dealt with several from the Balkan wars of the 1990s – but it is the first case involving countries that are not neighbours.

The three-day hearing in the neo-Renaissance-style Peace Palace is what is known as a provisional measures procedure. The Gambia will urge the court to make an emergency declaration that Myanmar must halt a continuing genocide, and the court will consider whether it has jurisdiction and whether there is a plausible case to answer. 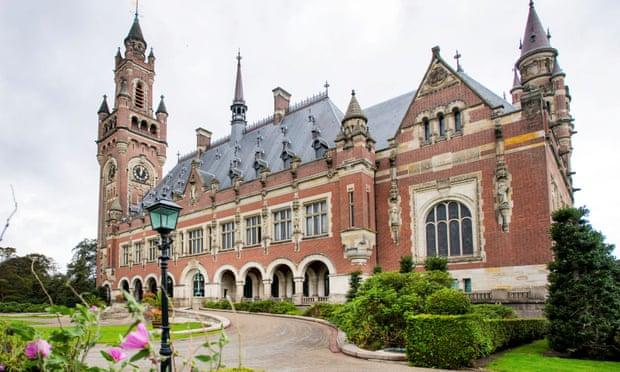 The Peace Palace, the home of the international court of justice in The Hague. Photograph: Piroschka Van De Wouw/Reuters

This preliminary phase of the claim will not involve personal testimony from any of the estimated 700,000 Rohingya who fled to Bangladesh after the start of what are alleged to have been military clearance operations.

The Gambia’s submission states: “The genocidal acts committed during these operations were intended to destroy the Rohingya as a group, in whole or in part, by the use of mass murder, rape and other forms of sexual violence, as well as the systematic destruction by fire of their villages, often with inhabitants locked inside burning houses.”

Its arguments rely on the findings of UN investigations that described “genocidal intent” in the crimes. The UN special rapporteur Yanghee Lee related first-hand accounts of “attacks in which homes were set ablaze by security forces, in many cases with people trapped inside, and entire villages razed to the ground”.

The Gambia’s case will be opened on Tuesday by Abubacarr Marie Tambadou, the country’s attorney general and justice minister, who studied law at Warwick University in England and later served with distinction as a special assistant to the prosecutor at the international criminal tribunal for Rwanda.

The hearing, which will be livestreamed, may attract a large international audience. It will be tempting for the Gambia’s lawyers, distracted by Aung San Suu Kyi’s presence, to personalise the accusations, but the focus will remain on the Rohingya victims.

In the run-up to the hearing, members of Aung San Suu Kyi’s National League for Democracy party held rallies in Myanmar’s largest city, Yangon. Among the country’s Buddhist majority, she retains overwhelming support.

The international criminal court (ICC), elsewhere in The Hague, has launched a separate investigation into alleged crimes against humanity committed by Myanmar’s leaders in forcibly deporting hundreds of thousands of Rohingya refugees to neighbouring Bangladesh.

An Argentinian federal court has begun receiving evidence in another case brought against Aung San Suu Kyi, on the principle that it has universal jurisdiction to consider torture cases from anywhere in the world.

Closing submissions from both sides at the ICJ will be made on Thursday. Judgment is expected to be reserved.