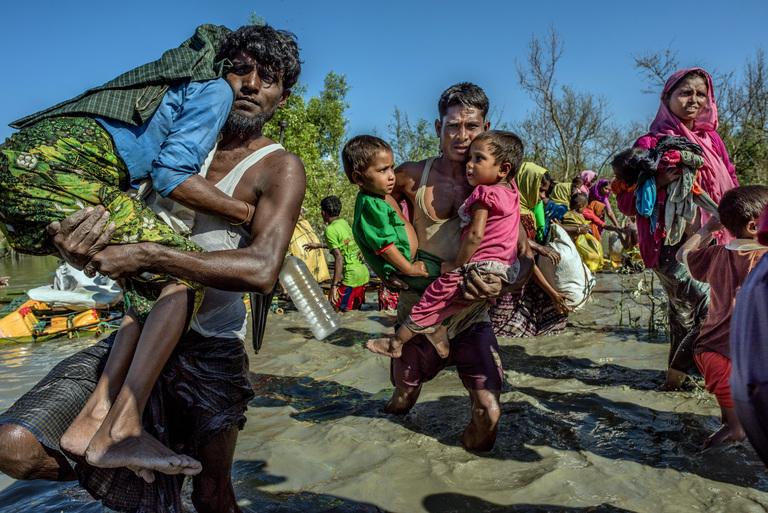 FILE — Rohingya refugees come ashore after crossing the Naf River into Cox’s Bazar, Bangladesh from Myanmar on Nov. 10, 2017. A day after Daw Aung San Suu Kyi listened at the world’s highest court in The Hague to testimony of the horrors inflicted upon the Rohingya Muslims of Myanmar, the Nobel Peace Prize laureate on Wednesday, Dec. 11, 2019, defended her homeland from accusations of genocide at the International Court of Justice. (Tomas Munita/The New York Times)

THE HAGUE, Netherlands — “Intercommunal violence.” Action against “insurgents and terrorists.” Possible — only possible — use of “disproportionate force.” But not genocide.

A day after Aung San Suu Kyi listened impassively to searing testimony about the horrors inflicted upon the Rohingya Muslims of Myanmar, she took the podium Wednesday at the United Nations’ highest court to defend her homeland against accusations of genocide, arguing that there had been no orchestrated campaign of persecution.

Her statement at the International Court of Justice in The Hague capped a jarring turnabout, decades in the making, for Suu Kyi, from champion of human rights and democracy to apparent apologist for brutality. She won the Nobel Peace Prize in 1991 for her ramrod resistance to the former military dictatorship that held her under house arrest for 15 years.

Suu Kyi did not directly address the atrocities by Myanmar’s military and associated mobs that were described the day before — summary killings, babies thrown to their deaths, mass rapes, whole villages burned to cinders — all amply documented by the U.N. and human rights groups. Thousands of Rohingya have been killed and three quarters of a million driven into a squalid exile in neighboring Bangladesh.

Instead, she insisted that what foreign observers have called an organized, yearslong campaign of atrocities against the Rohingya has been exaggerated and misconstrued, whether out of malice or just ignorance. She did not even use the word “Rohingya,” adhering to her government’s stance that no such ethnic group exists.

“Genocidal intent cannot be the only hypothesis,” she said on the second day of a three-day hearing, before launching into a litany of ways in which she said her government was trying to lift up the Rohingya from dire poverty.

The defense offered by Suu Kyi, her nation’s de facto civilian leader, was, by any measure, underwhelming, and did nothing to raise her much-diminished international reputation.

Instead, she went on the offensive against the outside world.

Presenting what many human rights experts have called some of the worst ethnic pogroms of this century as part of “cycles of inter-communal violence going back to the 1940s,” Suu Kyi chided foreigners for not having an adequate understanding of Myanmar’s complex ethnic and social history.

While saying that it could “not be ruled out” that the Myanmar military may have used “disproportionate force,” or did not “distinguish clearly enough” between rebels and civilians, she criticized “impatient international actors.”

“It would not be helpful for the international legal order if the impression takes hold that only resource-rich countries can conduct adequate domestic investigations and prosecutions,” she said.

The global community has come to describe the forcible expulsion of Rohingya from Myanmar since 2017 as ethnic cleansing, even genocide. U.N. officials have said the nation’s military generals should be tried for the gravest crimes against humanity.

In a landmark lawsuit filed by the West African nation Gambia on behalf of a group of 57 Islamic countries, Myanmar stands accused of genocide. Gambia’s case, which it began presenting to the court Tuesday, relies on testimony from numerous witnesses and human-rights experts, along with reporting from a U.N. fact-finding mission on Myanmar.

On Wednesday, Suu Kyi — who could have left the task to others — presented her country’s rebuttal, giving a spirited defense of the same military brass who had locked her up. She has consistently declined to criticize the generals with whom she has shared power since her party won elections in 2015, although she has allowed that armed forces can be hard-pressed to admit to their own failings.

The violence that began Aug. 25, 2017, she said, was set off by coordinated attacks on police and army posts by a Rohingya Muslim militant organization and amounted to operations used to “clear a locality of insurgents and terrorists.”

“If war crimes have been committed,” she said, “they will be prosecuted within our military justice system.”

Suu Kyi, personally, is not a defendant at the International Court of Justice, which rules on disputes between nations over questions of international law.

Hours before she began speaking, Myo Nyunt, the spokesman for her party, the National League for Democracy, dismissed the testimony presented to the court Tuesday as “he said, she said.”

“We have already prepared to rebut these accusations,” Myo Nyunt said. The U.N. report, he said, “is not complete because of a lack of evidence.”

Myanmar’s government prevented U.N. investigators from going to northern Rakhine, the center of the violence — a fact that Suu Kyi did not acknowledge Wednesday.

She said a fact-finding group that she had assembled had collected the most comprehensive record of witness testimony.

Her aides have characterized as fake news various crimes against the Rohingya. Only two isolated cases of killings have been the subject of legal inquiries within Myanmar.

Diplomats who have tried to bring up the situation in Rakhine with Suu Kyi say she cut them off; two of them say she even refused any further one-on-one meetings.

Bill Richardson, a former U.S. ambassador to the U.N. who was asked by Suu Kyi to participate in one of several commissions on Rakhine that she put together, quit in disgust last year after he said she “exploded” in anger at his criticism. “She might have hit me, she was so furious,” he recalled then.

The great hall of the International Court of Justice, a polished space of chandeliers and stained glass windows, has been packed with diplomats, activists, lawyers and reporters vying for a glimpse of Suu Kyi. She did not react Tuesday as Justice Minister Abubacarr M. Tambadou of Gambia opened his country’s case by urging the court to tell Myanmar “to stop this genocide of its own people.”

“It is indeed sad for our generation that 75 years after humankind committed itself to the words ‘never again,’ another genocide is unfolding right before our eyes,” he said. “Yet we do nothing to stop it.”

Paul Reichler, an American who is the lead lawyer for Gambia’s legal team, addressed the question of whether Suu Kyi bore personal responsibility for the deaths of thousands of Rohingya. Her defenders say she is constrained by the military’s continuing grip on some of the most important levers of power in Myanmar.

But Reichler showed the court a picture of large billboards that have appeared in Myanmar in recent days, showing her superimposed in front of three smiling generals with the caption: “We stand with you.”

Myo Nyunt, the National League for Democracy spokesman, said that the billboards did not mean Suu Kyi and the military were united. “It just means they are in the same Cabinet,” he said. “This case is very delicate and we need to handle the problem gently.”

Suu Kyi’s party is facing elections next year and her attitude toward the Rohingya has broad support in Myanmar.

“Unfortunately she has totally taken sides, and she is now whipping up nationalism simply to become more popular,” said Maung Tun Khin, a Rohingya who traveled to The Hague from London to witness the hearings.

Thinzar Shunlei Yi, a youth activist in Myanmar, said support for the National League for Democracy had been flagging in the face of ethnic strife and a struggling economy, but people have rallied around the party over the genocide case.

“We can see that the divided political forces inside Myanmar have united to face a lawsuit from a foreign country that is seen as a common enemy,” she said.

Rohingya Muslims have been persecuted for decades in Buddhist-majority Myanmar, gradually losing rights to education, health care and even citizenship. Half a million Rohingya still live in Rakhine, but they have been herded into internment camps or prevented from leaving their villages, even to farm or collect firewood.

Those who have fled to Bangladesh are crowded into the world’s largest refugee camp.

The purpose of this week’s hearing is for the court to decide whether to order measures to protect the Rohingya who remain in Myanmar. A U.N. rapporteur recently warned that “crimes with genocidal intent” were continuing and intensifying in Rakhine.

A ruling on the underlying allegation of genocide could take years. Another case against Myanmar, formerly called Burma, is working its way through another international court.

Abdul Malik Mujahid, who heads Burma Task Force USA, part of a coalition of Muslim groups, said he believed that Suu Kyi’s presence at the court would backfire by giving renewed exposure to the continuing plight of the Rohingya.

“I’m sure she is doing a disservice to her government and her cause by showing up,” said Mujahid, an imam who traveled from Chicago to attend the hearing. “The world will pay attention to her, and also to the facts in a legal case that might otherwise get little attention. She is providing infamous star power to the case.”

Source
This story was originally published at nytimes.com