FILE – Rohingya refugees gather at a market inside a refugee camp in Cox’s Bazar, Bangladesh, March 7, 2019.

Fearing the devastation that coronavirus could wreak in refugee camps, a group of 50 humanitarian and advocacy organizations sent an open letter Thursday appealing to Bangladesh’s government to lift its telecommunications restrictions on Rohingya refugee settlements.

The letter, addressed to Prime Minister Sheikh Hasina, also urged the government to halt construction of barbed wire fencing around the camps.

“These measures threaten the safety and well-being of the refugees as well as Bangladesh host communities and aid workers, in light of the growing COVID-19 pandemic,” the letter said.

In September, Bangladeshi authorities ordered telecom firms to restrict internet coverage in the camps. They also have seized more than 12,000 mobile phone SIM cards from refugees, the letter said, attributing that figure to Bangladesh’s Refugee Relief and Repatriation Commissioner. 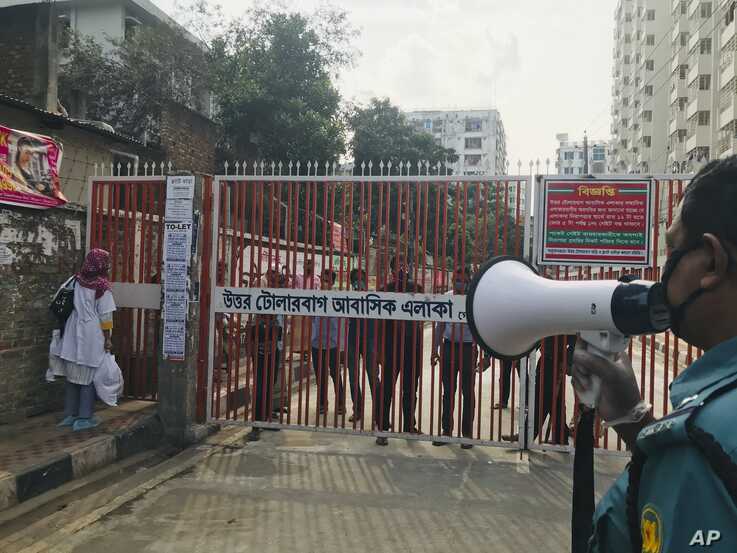 FILE – A policeman urges residents not to come out of their homes as residents stand behind a gate, hours after the second death from COVID-19 was confirmed from the area, in Dhaka, Bangladesh, March 23, 2020.

The restrictions limit camp residents’ awareness of the health emergency and how to reduce risk. They can’t look up information on the internet, nor can they readily use phones to check on each other or to call for emergency medical help. The risks extend beyond refugees, the letter said.

“Without access to mobile and internet communications, aid workers and others will be forced to deliver critical health information in person, heightening their risk of exposure to COVID-19 and slowing the effectiveness of the response,” the letter said.

“There has been a severe lack of information. … It’s a terrifying situation,” Hena Zuberi, director of the Washington-based Burma Task Force, told VOA in a phone call. She also noted that “a lot of aid workers don’t have enough PPE,” or personal protective equipment.

The task force is among the letter’s signatories, which includes its parent organization, the Chicago-based advocacy group Justice for All. Other signatories include the Association of Southeast Asian Nations’ Parliamentarians for Human Rights, Amnesty International, Human Rights Watch and the Rohingya Refugee Network.

“Access to information is an essential component of an effective public health response to a pandemic,” the letter emphasized. It noted that last month, experts from the United Nations, the Organization of American States and the Organization for Security and Cooperation in Europe urged all governments to “ensure immediate access to the fastest and broadest possible internet service” because of COVID-19.

The letter also commended Bangladesh’s government for working with humanitarian groups on preparedness measures, such as setting up isolation and treatment facilities. And it praised the government for taking in Rohingya “forced to flee atrocities perpetrated by the Myanmar army.” More than 700,000 people surged into Cox’s Bazar from nearby Rakhine state in Myanmar after a military-led “clearance operation” in August 2017.

As of Thursday afternoon, Bangladesh had recorded 56 confirmed cases of COVID-19 and six deaths, according to Johns Hopkins University’s coronavirus tracker.