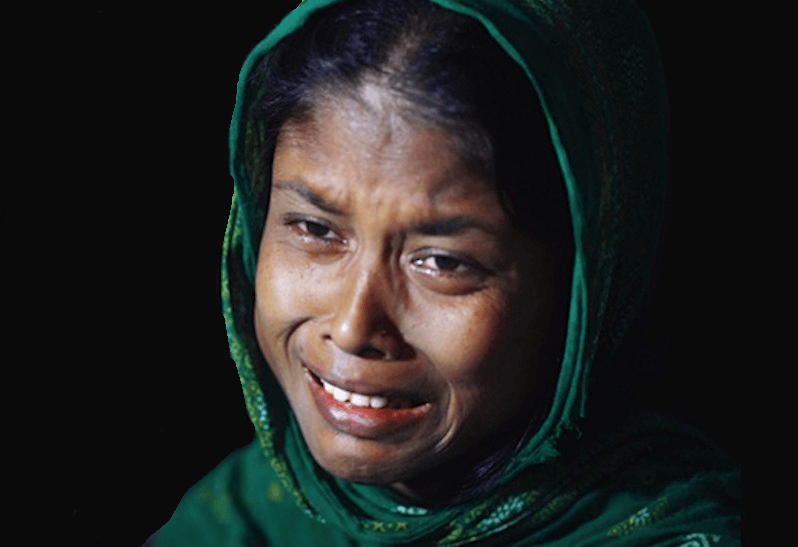 Ayesha is a Rohingya woman who lived with her husband in the Arakan area of Burma, until her husband was killed by extremist Buddhists. Not much more is known about the death of Ayesha’s husband, but we know it left her alone.  Without anyone to care for her, Ayesha was forced to join other desperate Rohingyas on a small boat headed across the large gulf to Bangladesh, where they hoped to find shelter.

Ayesha’s story of being forced to flee her home is not an uncommon one. Half a million other Rohingyas have had to escape from Burma as they attempt to find refuge from Buddhist extremists and the Burmese government. However, the Rohingyas who reach Bangladesh are met with nothing but more despair. The Bangladesh government refuses to allow Rohingya refugees to land on their shores, as they believe this will encourage more refugees to come. Even when the UN offered Bangladesh $30 million to provide aid to the Rohingyas, Bangladesh insisted Rohingyas were not welcome on their shores, and declined the money.

Why are Rohingyas fleeing their ancestral homeland of Burma where their families have lived for generations? They are persecuted and oppressed.  For example, Rohingyas have been barred from going to the store, or from getting jobs, which forces them to rely on nature to sustain themselves and their families. Rohingya men have to go out to the jungle to collect wood for their stoves. Usually young men go out into the jungle in groups, with the hope that their numbers will protect them from attacks. These attacks, which are common, often leave the men injured or even dead. It was in one of these attacks when extremist Buddhists killed Ayesha’s husband and left her a widow desperate to seek aid by escaping Burma.

But Bangladesh would not take her – this photo above of sister Ayesha was taken by a brave photographer as the Bangladesh Navy pushed Ayesha, and her small boat, back out to sea.

Where is sister Ayesha today? No one knows. She cannot return to Burma, because the Burmese government has taken away her citizenship papers, as they have done to the rest of the Rohingya population. Burma is no longer her home, there is nothing left for her there. Her husband, her life-long partner, is dead, there is nobody who cares for her, the government will not let her keep a job, and she has been blocked off from all chances of opportunity.

Though Muslim nations are trying to send aid help people like Ayesha, the Burmese government is not using this aid to care for the Rohingyas. According to Professor Penny Green and two others, the food the Burmese government grants the Rohingyas provides only 200 calories more than the food prisoners were given in Nazi concentration camps. This is the reason the photos of Rohingya refugees are looking increasingly like the photos of prisoners from Nazi death camps.

The only choice sister Ayesha had was to set sail, once again, along with the other Rohingyas who were fleeing Burma. In their small, ill-equipped, hole-ridden boat, this group of refugees had to try to reach the shores of Thailand, Malaysia, or Indonesia. We do not know if Ayesha ever reached another country. Five to seven hundred thousand Rohingyas have sold all their possessions, and given up everything that reminds them of home, just to have enough money to pay for a boat trip to another country. Many of these boats sink, taking the Rohingyas with them.

If the Rohingyas are lucky enough to survive the journey and reach Thailand, they will face the Thai Mafia. The Mafia will capture them and hold them until the family pays a ransom. If the cost is too high and the family cannot pay, the captured Rohingyas are destined to join the other bodies in the mass graves along the border of Thailand.

I wish I knew where Ayesha was today. All we can do is pray for her. Burma used to have 5-8 million Muslims, but today that number has dwindled down to less than 3 million. This is the slow genocide of Burma. This is the story of Ayesha.

Please give Zakat today to help end this genocide.