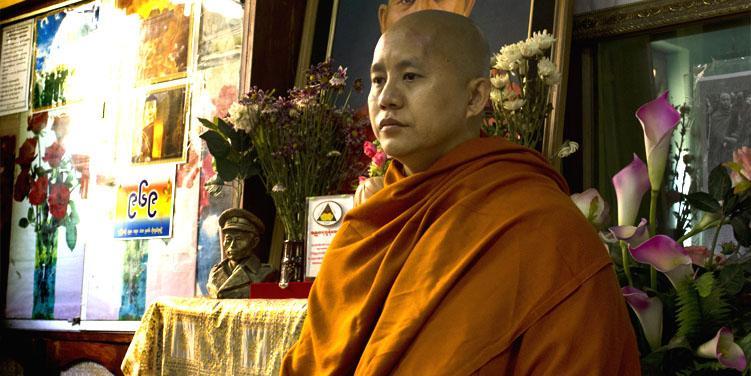 The Saffron-robed man Wirathu, whom Time magazine dubbed “The Face of Buddhist Terror” (in Burma), explained his view about the world’s Muslims in general and Muslims of Burma in particular at the congregation held at Moe Gaung Monastery, Mandalay, Burma (Myanmar), on 6 July 2014.

Wirathu’s worldview: In his own words from 00:00 till 02:45 minutes(Verbatim translation)

“On the eve of India’s independence in October 1947, that country’s Muslims were staunchly opposed to the idea of non-Muslim government which would rule the Muslims there.  So the Muslims there carried out Jihad chronically.  They slaughtered Hindus in large numbers.   The Muslims also launched arson attacks on Hindus.  Then these Muslims attempted to befriend and ingratiate themselves with Mahatama Ganghi. Gandhi went on fast when the Hindus planned to retaliate the Muslims. Out of their reverence and fondness for Gandhi the Hindus there chose to be tolerant towards India’s Muslims.   As a consequence of this pattern of Muslim attacks and Hindu tolerance, certain provinces were cleansed of all Hindus.

Subsequently, those (Hindu) who came to hold the view that as long as Gandhi was alive India would never regain her independence and would forever remain in colonial bondage assassinated Gandhi.  The assassin was a follower of Gandhi.  A Hindu killing a Hindu.

When they (Muslims) feel threatened or find themselves in a crisis they would approach monks and beg for support and protection.  As soon as the risks  subside Muslims simply turned their back on the monks. So, do not attempt to use us, Burmese monks, the way India’s Muslims used Gandhi.