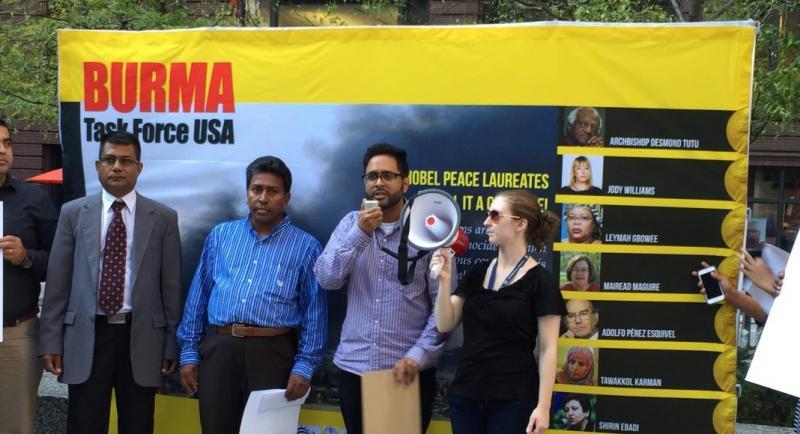 On Friday, 19 August 2016, the first World Rohingya Day demonstrations took place around the world. Thanks to all who organized, participated, and publicized these rallies.

The speakers demanded end to the ongoing genocide of Rohingya people who are indigenous people of Burma living in their ancestral lands.

Journalists from Al Jazeera were present, and coverage of this event can be found in the Burmese publication the Irrawaddy.

The Chicago rally took place in Federal Plaza. Speakers included Jennifer and Tauseef from the Burma Task Force team; Aishah, a translator in the Rohingya community; Dr. Azeem Ibrahim, author and scholar on the Rohingya; Jacob Heiss, musician who advocates for indigenous people’s rights; Shaukat, a Rohingya immigrant; and Asayo Horibe, a Japanese internment camp survivor and Buddhist leader. A poem by a Rohingya was read out by Shirmeen (interning producer at Radio Islam). Two Rohingyas told their first-hand stories. Muslim, Buddhist, and Christian perspectives on the responsibility to protect were shared. The rally was covered by the Burma Times & Rohingya Vision TV.

In New York City, the World Humanitarian Day rally too place in front of the United Nations. The speakers list included, Adem Carroll from the BTF team; Imam Aiyub Baki and Syrian American Imam Samer al Raey; Indian Muslim activist Sana Uddin; Three speakers from Amnesty International main offices; and at least 6 Rohingyas spoke in English and in their language. Organizers & participants gave out our materials to passersby, as well as at the closest Masjid after Juma prayers. We also gave our statements to 2 journalists that were in the area to report on other UN activities, one proved to be Indian media.

In Stockholm, Sweden, the rally was held in front of the Swedish Parliament House. It was heavily attended by Rohingya with several Rohingya speakers.

In Toronto, Canada, the rally was held at Mississauga Celebration Square. It was very well attended by both Rohingya and non-Rohingya, and was deemed by the organizers to be a great success. Speakers included Anwar Arkani – Leader in the Rohingya community; Sayyid Ahmed – Rohingya refugee; Farheen Khan – writer, community activist, consultant; and Farina Siddiqui – business management consultant, speaker & community activist.

In Los Angeles, the rally was held in front of the Consulate of Myanmar.  Speakers were informal, sharing slogans and stories.

In Boston, the rally was held at Harvard Square.  It was attended by some Rohingya and many allies, carrying placards with the Rohingya’s grievances.

In Durham, North Carolina, there was no rally, but artist Kulsum Tasnif included a nod to the Rohingya cause in her exhibit which opened on 14 August and will close on the 27th.  Called Journey to the Good Life, the exhibit showcases paintings inspired by the refugee experience.  Interviews taken by BTF staff with anonymous Rohingya refugees were audio-recorded and piped into the exhibit for viewers to hear while exploring the art.  Ms. Tasnif reported good attendance at the exhibit and was excited to mention that it was well received – particularly the audio interviews that contextualized it.