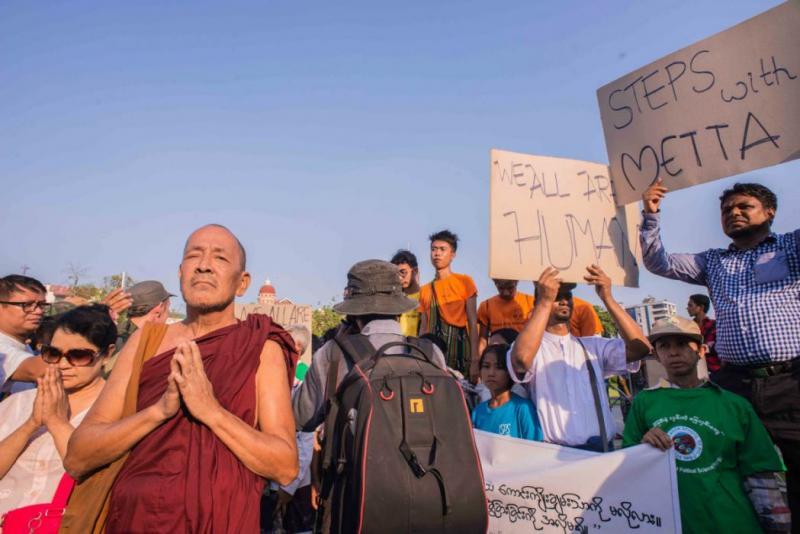 Interfaith student youth activists took to the streets of Burma to protest against recent Islamophobic hate crimes that have been perpetrated by extremist Buddhist nationalists against the minority Muslim population of Burma.

“We are marching together within every religion! Everyone can join with us!”

If you were out in Yangon on Saturday you may have heard these words drifting through the streets from Tamwe Township to Sule Pagoda downtown.

They were shouted by a man at the head of an interfaith rally of around 200 people that was organized by students from the Yangon School of Political Science in response to disturbing anti-Islamic incidents in recent weeks.

Sadly, in the quixotic landscape of Burma’s politics, these demonstrators will be charged with violating the Peaceful Assembly and Procession Law while the monks of the Ma Ba Tha and their surrogates are feted by political leaders.:

“We will bring legal action against them because they refused to hold the walk where we told them to. They chose their own way even though they were aware it wasn’t authorised. Each township [they passed through] will pursue legal actions,” Mingalar Taung Nyunt officer Police Lieutenant Major Than Oo said.

All reports indicate that the demonstration was completely peaceful and beautiful, as protesters “stopped at a mosque, a church and Hindu and Sikh temples to bow their heads in respect to Yangon’s diverse religious traditions.”