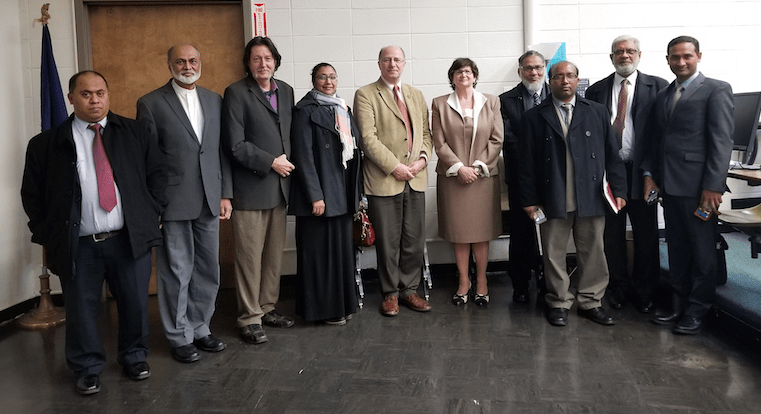 “We’d like to think we’ve learned from history but . . . . we have a holocaust of its own going on, the Rohingya people and we need to wake up.” – Steven Markowitz, chairman of Nassau’s Holocaust Memorial

The brutal campaign of atrocities committed against Myanmar’s Rohingya minority is similar to the Nazi efforts to wipe out European Jews in World War II, the chairman of Nassau’s Holocaust Memorial and Tolerance Center said Sunday.

“The holocaust happened because people were indifferent to it,” Steven Markowitz said in opening remarks for a program on the plight of the Rohingya at the Webb Institute in Glen Cove. “We’d like to think we’ve learned from history but . . . . we have a holocaust of its own going on, the Rohingya people and we need to wake up.”

About 100 people listened to presentations on the destruction and displacement of the Rohingya Muslims from Rakhine province in Myanmar that sharply escalated in August when government forces began a scorched-earth campaign against their villages.

Since Aug. 25, 688,000 refugees have fled Myanmar into neighboring Bangladesh, joining 212,000 refugees who were already there, according to a February report by the office of the United Nations High Commissioner on Refugees.

“Persecuted, helpless and defenseless, Rohingya’s are in dire need of international protection, right now,” Nurul Islam, a Rohingya and chairman of U.K.-based Arakan Rohingya National Organization said. Islam said the United Nations Security Council has been “paralyzed” and has failed to act in the face of genocide.

“We don’t want to lead a life of humiliation, as a beggar, as refugees in foreign countries, we want to go back to our homes. . . . Please help us,” he said.

Myanmar’s government has denied that its military has committed systematic atrocities and has denied access to the region to journalists and international investigators.

Abdul Malik Mujahid, president of Chicago-based Sound Vision, a Muslim organization, described a pattern of human rights abuses against the Rohingya that has gone on for decades, culminating in the current situation of hundreds of villages being burned and bulldozed.