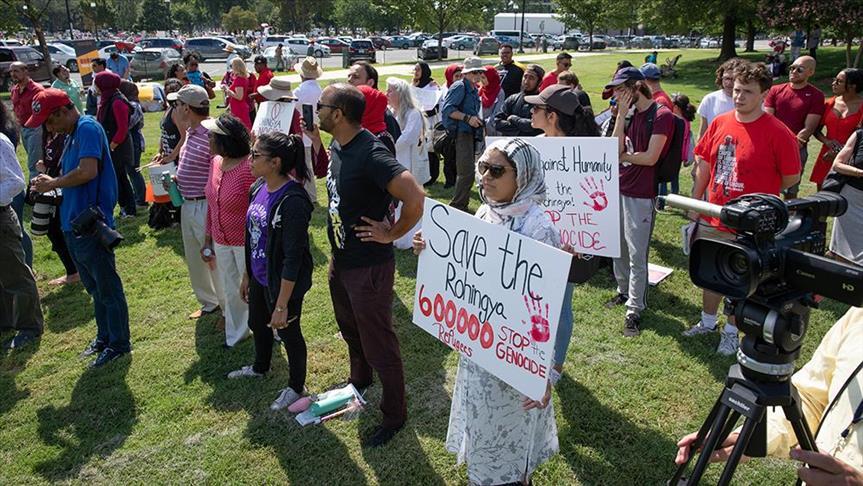 ‘We want these massacres to be accepted as genocide by the U.S. and international community,’ said observer Hena Zuberi

A group of Rohingya Muslims gathered in front of U.S. Capitol building Saturday to mark the first anniversary of violence against their community by the Myanmar army in Rakhine state and their exodus to Bangladesh.

The demonstration was coordinated by multiple Muslim and Rohingya organizations, including the Council on American-Islamic Relations (CAIR), Dar Al-Hijrah Islamic Center, the International Campaign for the Rohingya and the Burma Task Force.

“We want these massacres to be accepted as genocide by the U.S. and international community,” Burmese Task Force Director Hena Zuberi told Anadolu Agency.

More than 750,000 Rohingyas fled Myanmar last August and crossed into Bangladesh, fleeing violence and massacres initiated by the Myanmar army.

Zuberi mentioned the Rohingya community thought that the exodus would be a temporary solution and soon the Rohingya would return to their homes, however, one year later, they remain in refugee camps.

“We thought it would be a temporary stay. But it has been a year, and nothing has changed. The needle is stuck, and we want this needle to move,” Zuberi added.

“It is a call of the Rohingya people, they have called for this day to be marked all over the world. So we can support them, so we can stand in solidarity with them, so we can educate people about the genocide,” Zuberi said, noting that the U.S. administration should take initiative.

Since Aug. 25, 2017, more than 24,000 Rohingya Muslims have been killed by Myanmar’s state forces, according to the Ontario International Development Agency (OIDA).

In its recent report, Forced Migration of Rohingya: The Untold Experience, the OIDA increased the estimated number of murdered Rohingya to 23,962 (±881) from an earlier Doctors Without Borders figure of 9,400.

The Rohingya, described by the UN as the world’s most persecuted people, have faced heightened fears of attack since dozens were killed in communal violence in 2012.

The UN documented mass gang rapes, killings — including of infants and young children — brutal beatings, and disappearances committed by Myanmar state forces. In its report, UN investigators said such violations may have constituted crimes against humanity.