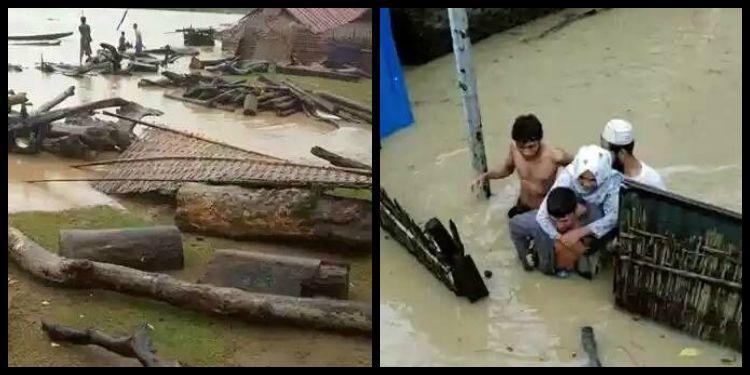 Heavy rains from a tropical depression in the Bay of Bengal have triggered massive flooding in Rakhine State, causing a rising death toll of at least 20, with thousands of people affected. Thousands of homes have been affected, forcing some to relocate. The flooding has also damaged roads and bridges.

The flooding has caused massive destruction to the Rohingya IDP camps, “floating and helpless” according to a source.  Unfortunately, there has yet to be any media coverage on how the flooding is affecting Rohingya in these camps. Social groups and aid organizations are not allowed to give any assistance to the Rohingya.

The weather bureau has announced that that the rain will continue or increase for two more days.

Please see and distribute the attached Action Alert for more information on this situation and how you can help.

1. Bring attention to this crisis on social media

This crisis is not getting attention from mainstream media.  We need to generate that attention to pressure the Burmese government into allowing aid groups to give significant assistance to the Rohingya in these camps.

2. Call the Burmese embassy in your country and demand that they allow aid agencies to assist Rohingya in Rakhine State and IDP camps.

Denying aid to the suffering Rohingya is vicious.  Relief organizations must be allowed to help them as they help others in crisis.  They must also be allowed to build adequate housing in the camps until the Rohingya are allowed to return to their homes.