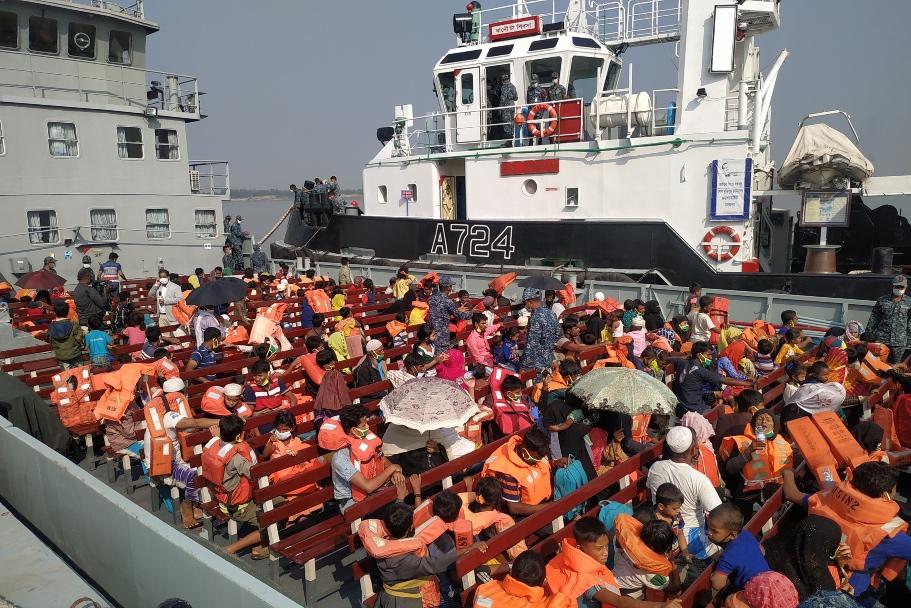 File photo of Rohingyas board one of the ships at Chittagong Boat Club to travel to Bhashan Char on Friday, December 4, 2020 Humayun Kabir Bhuiyan/Dhaka Tribune

North American imams and Muslim leaders have demanded Bangladesh government to halt the relocation of Rohingyas.

A diverse group of 120 imams, chaplains, scholars and other leaders in the USA and Canada has signed onto a letter to the Foreign Minister of Bangladesh.

In the letter, they wrote the government should halt relocation of Rohingya Muslims to Bhashan Char, an island built atop an unstable sandbar far from the mainland, and that access be given to UN investigators to determine if the relocation is non-coercive and safe.

Participating imams noted that more than a dozen families were placed on the relocation list without their consultation.

“Rohingya are frightened and in hiding,” stated Imam Taha Ghayyur of Justice for All Canada.

“Therefore, it is not surprising that Canadian imams and leadership are requesting a more compassionate response. We have witnessed previous attempts to relocate Rohingya families to Burma as well as Bangladesh, and this creates a climate of fear,” he added.

“The current pandemic is not an excuse to disrupt Rohingya refugee lives further. Though Bangladesh has been very generous in welcoming so many Rohingya fleeing for their lives, recent policies of relocations, without UN’s assessment of the island, appear counterproductive and distract from the ultimate goal: restoration of Rohingya rights and homes in Myanmar,” added Shwe Maung, Rohingya leader and former MP in the Parliament of Myanmar.

“This week Sesame Street announced two Rohingya puppet characters, demonstrating how the world is embracing these Muslim genocide survivors. Does Bangladesh really wish to take this moment to add trauma on top of trauma?” asked Imam Malik Mujahid, founder of Justice for All, which since 2012 has sustained the Burma Task Force, a well-known human rights advocacy program.

“While the government has been placing long-term restrictions on cell phone and internet services, the pandemic has further impacted education. What future will Rohingya children have in these prison-like camps? The puppets may be treated better than the actual refugee children,” he added.

The North American imams have demanded a stop to relocation, an independent assessment, due process standards to be clarified to avoid coercion, and a role for Bangladesh based civil society to assess Rohingya needs and preferences.