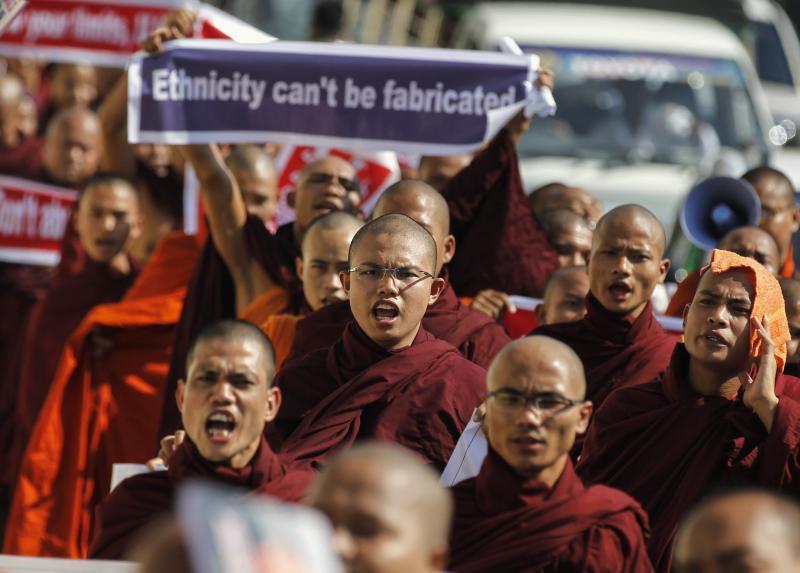 Suu Kyi, during her meeting with Secretary of State John Kerry stated that the name “Rohingya” and “Bengali” should not be used to refer to the persecuted ethnic Muslim minority because they are divisive and “emotive” terms that don’t help to resolve the conflict. Once again Suu Kyi is addressing the issue without actually offering any real, concrete solutions. While she has been fond of telling others what not to say, she has been short on offering any solutions: if they aren’t to be called Rohingya then what should they be called? Why is their right to self-identity being denied?

Already her non-committal advise is ringing hollow. Channel New Asia reports that some Burmese extremists are already rejecting Suu Kyi’s call, and the Rohingya continue, rightly so, to insist on their rights to be identified as “Rohingya.”

Some Rohingyas are concerned about the repercussions of not being able to use the term.

“If we stop using the term, the term which belongs to our identity and our culture, our traditions, what do you call these people?” said Wai Wai Nu, a Rohingya and human rights activist for the Rohingya community. “So it’s important to call their name and respect their fundamental rights.”

The community fears that they will not be considered citizens and will not enjoy the privileges of being Myanmar citizens if the term Rohingya is avoided.

Myanmar nationalists, on the other hand, said they will defy Ms Suu Kyi’s suggestion and will continue to call the community Bengalis.

“I don’t accept using the term ‘Rohingya’,” said Zaw Win, an anti-Rohingya campaigner. “I will continue to call those people ‘Bengali’. If both of the terms ‘Rohingya’ and ‘Bengali’ are not to be used, the new government and Daw Aung San Suu Kyi should inform the public which term we should use to address them. We will continue protesting around the country as long as the government doesn’t make an official statement saying the Rohingyas do not belong here.