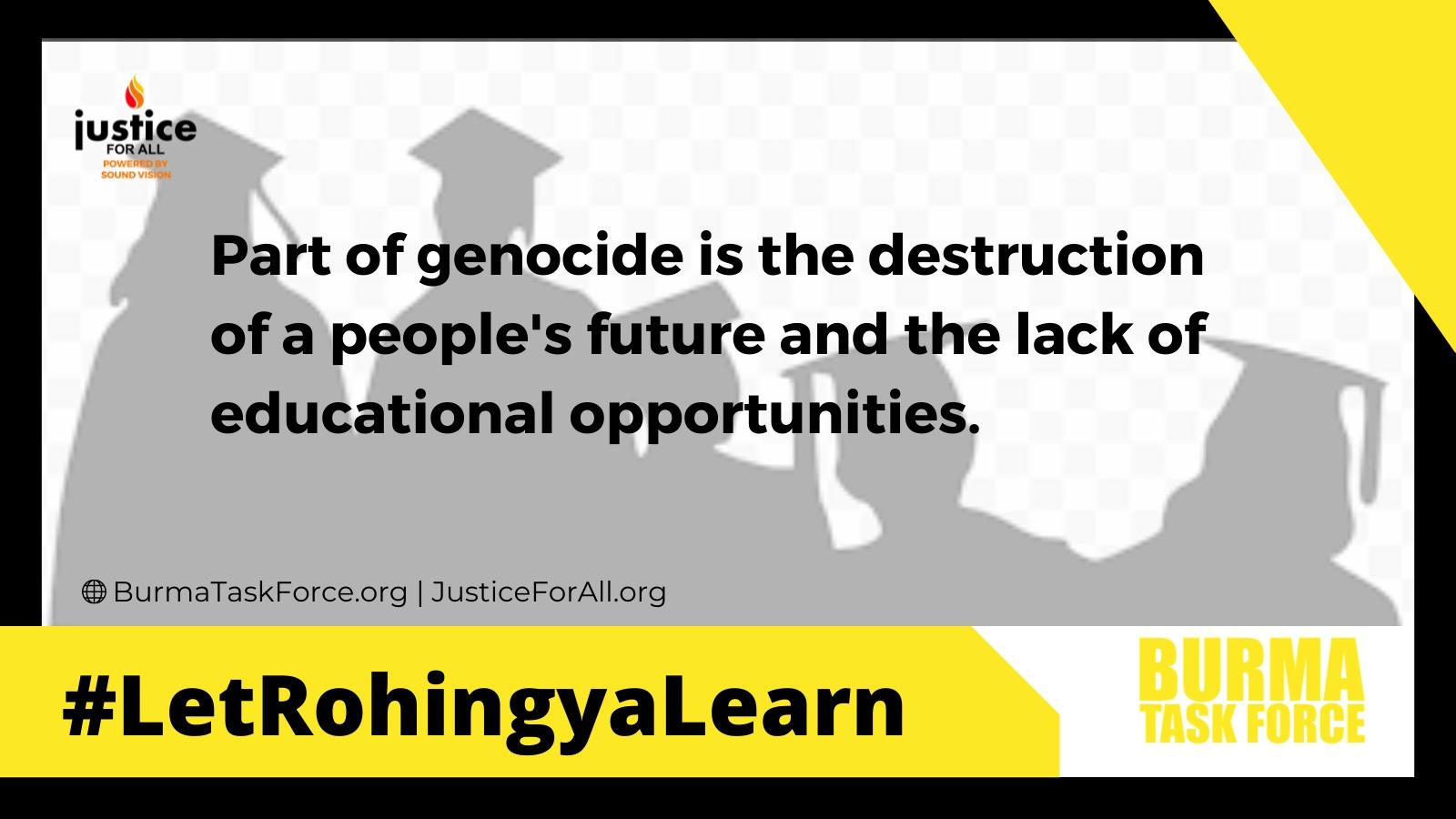 A memo has been submitted by Burma Task Force to USAID asking for educational access for the Rohingya refugees. The text of the memo submitted is below:

A MEMO FOR INTERNATIONAL LITERACY DAY

Dear Ms. Power, Ms. Stevens and colleagues:
Burma Task Force, a program of the Human Rights Advocacy NGO Justice for All, works to prevent and mitigate mass atrocities and stop the persecution of minorities. Originally formed to stop the Bosnian genocide, our NGO now works with impacted communities such as the Rohingya, the Uyghur, and the Muslim minorities in India and Sri Lanka.

The Rohingya diaspora leadership, and refugee leaders in Bangladesh and Malaysia have all implored us to give attention to the denial of education to Rohingya children. Earlier this summer we launched a new campaign on this important topic, publishing a new report “Let Them Learn: Confronting the Need for Rohingya Education,” which can be downloaded at https://www.burmataskforce.org/let-rohingya-learn

Despite a reluctance to criticize the government of Bangladesh, shared by many humanitarian agencies, we note that its policies towards Rohingya education remain highly restrictive. Since repatriation to a military-dominated Myanmar is highly unlikely to happen in the near future, Bangladesh does have a legal obligation to open schools in the camps. Failure to do so is, frankly, another aspect of genocide and erasure of a people.

Therefore, we strongly request that USAID ensure school services are provided without further delay by earmarking funds from its humanitarian aid. And whether or not the requirement is made explicit, it’s crucial to make educational access a condition for continued funding, at least in effect. To do less will lead to further delay and further harm to the 600,000 children in the camps of Cox’s Bazar.

Recognizing that the area of Cox’s Bazar also requires development and support for it’s education system, we support USAID helping both the host community and the refugee community.However, Rohingya need are profound and urgent. As a persecuted minority, Rohingya Muslims have long faced drastic limits on access to school in their homeland of Rakhine State, Burma. Since they fled the 2017 genocide, hundreds of thousands of Rohingya ch ildren have been crowded into vast refugee camps in Cox’s Bazar, Bangladesh. Despite the hospitality of the Bangladesh nation, Rohingya access to education has been extremely limited. It is time to expand access to education, both with in person classes and online distance learning:

In addition to keeping the Rohingya people in poverty, the current lack of educational opportunities can lead to alienation, criminal activities, child marriage and trafficking. The coronavirus pandemic has further exacerbated poverty and isolation. We trust USAID will help with this crisis situation. Children should not be treated this way. It’s simply unacceptable.