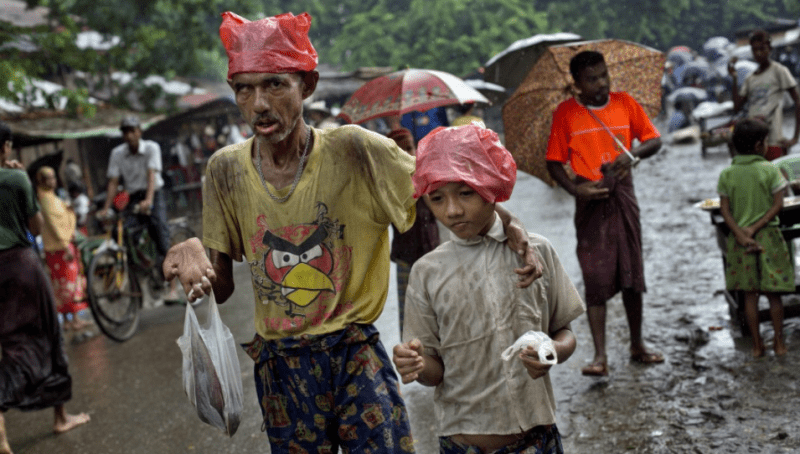 “Almost a million Rohingyas have been forced to flee to Bangladesh after facing waves after waves of attacks, often spurred by campaigns on Facebook”

Americans talk about fake news spread over Facebook as a relatively new phenomenon, and an annoyance. In Burma, it has been a life or death matter. Facebook is the Internet for most Burmese, and rumor after false rumor, spread on Facebook along with doctored photographs, has contributed to the ongoing genocide against the Rohingya community.

For example, a single false rumor on Facebook in 2012, about Rohingyas bringing weapons in from across the border and stockpiling them in Mosques, led to the forcible expulsion of 150,000 Rohingyas from the Rakhine capital city of Sittwe. Five years later, these displaced persons are still languishing in what some observers call twenty-first century concentration camps.

Almost a million Rohingyas have been forced to flee to Bangladesh after facing waves after waves of attacks, often spurred by campaigns on Facebook, which result in murder, rape, and arson against them.

The main leader of these campaigns of hate is a prominent Buddhist monk named Ashin Wirathu. His hatred is not secret. It is all over Facebook. He is so well-known for his hate that as early as July 1, 2013, his face was on Time magazine’s cover as “The Face of Buddhist Terror.” Wirathu’s hate is so vitriolic that even the Burmese government, which refuses even to recognize the Burmese citizenship of the Rohingya and refuses to mention them by name, has banned his hate group—Ma Ba Tha.

It took Facebook until February 2018 — four years, six months, and 30 days after Time’s feature published — to ban Wirathu’s Facebook page. It was far too late for the victims of genocide, too late for the thousands of women raped, too late for the hundred of thousands wasting away in camps in neighboring Bangladesh. And even now, his videos are still not banned on Facebook, and hundreds of other Facebook pages promoting his hateful teachings still exist.

Wirathu, who calls himself, the “Burmese Bin Laden” built his support on Facebook, mostly unchecked. He gathered hundreds of thousands of followers, who religiously circulate his incendiary sermons and videos calling Muslims dogs, rapists, and savages who convert Buddhists by force

By now, this prophet of hate has achieved his purpose. The entire nation of Myanmar is boiling over with hateful rhetoric, drowning the reasonable voices of many Buddhist monks who have stood up against hate.

Facebook’s irresponsibility is clearly evident in the case of Myanmar and the dangerous speech propagated through this medium. It is not that Facebook was not aware of Warithu’s hate. Sometimes they removed his posts, and at times they restricted them. But the company failed to take seriously the extraordinary role that Wirathu’s Facebook page played in promoting the genocide of a people.

The design of Facebook’s algorithms end up favoring rising hate. Posts that are shared and liked more get more prominent positioning on news feeds, and the cycle of bigotry continues with every share. Rinse and repeat. Zuckerberg has also made unhelpful public statements that seem to create a false equivalence between all sides in the Rohingya crisis. But the situation in Burma is a genocide, not an inter-ethnic conflict. The sides are not equally to blame.

Zuckerberg, plans to testify today before the joint hearing of the House Energy and Commerce Committee about the massive harvesting scandal, in which the data of nearly 90 million people was used by Cambridge Analytica, a firm connected with Russia. But the questions by our elected officials cannot end there. Here are some additional questions that need to be asked by the committee:

How does Facebook plan on changing its handling of hate speech?

Is Zuckerberg aware of the role hate speech has played in the genocide of Rohingya?

What does he think of the United Nations Fact Finding Mission on Myanmar which accused Facebook of being a powerful vehicle of hate?

How many social scientists and experts on hate speech work at Facebook?

Why was Facebook banned in Sri Lanka last month for almost a week?

What can Zuckerberg do to avoid this from occurring in future?

I hope that Facebook thrives and regains its $100 billion in lost value, but also that it becomes a space where neither individuals are bullied to death nor are a people lost to genocide because of the hate it facilitates.

Facebook must consider that great responsibility is inseparable from great power.