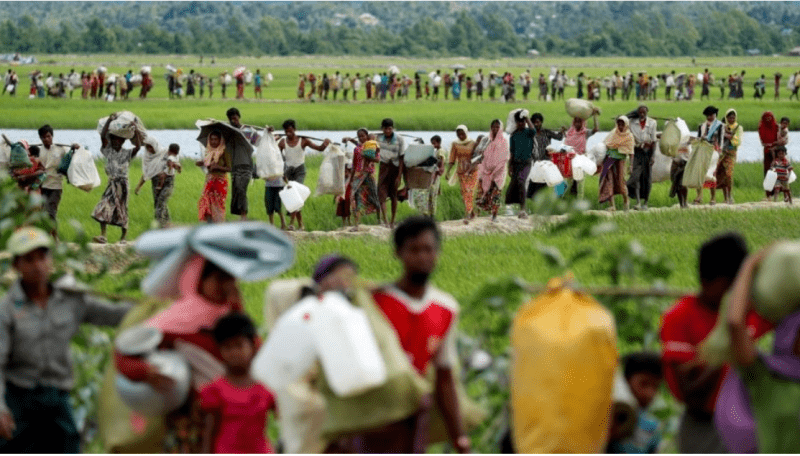 Even Fox News has begun to report on Rohingya suffering, thanks to the involvement of interfaith allies

“Injustice anywhere is a threat to justice everywhere.” This call to action by the Rev. Martin Luther King Jr. rang true when I was visiting the largest refugee camp the world has ever known with an estimated 700,000 to 1 million people.

Bangladesh has taken in the people fleeing genocide of Myanmar (formerly Burma), who are being slaughtered by the Burmese military. This army is systematically working to eradicate anyone who is not like them: Rohingya Muslims, Christians, Hindu, other tribes…the list goes on.

Traveling with a U.S. delegation of interfaith leaders from every religion, we visited the camps in eastern Bangladesh. After taking-in the chaotic situation, there is no way to comprehend how this militarized Myanmar government can commit such heinous acts of brutality – such evil. In speaking with the refugees, these are the stories I encountered in the camps that I never expected to bear witness to, and that must be told:

1. A sweet 13-year-old girl in a princess dress, who told me she had been raped repeatedly alongside her mother, by over 10 men. Today, Moriom is treated regularly for STDs. Her mother and father and three siblings are all dead.

2. A woman who desperately clung to her 1-year-old baby, as soldiers stabbed her in the head and chest, and tried to slit her throat. When they finally wrestled her baby from her, the soldiers smashed the baby’s head into the ground and the baby died instantly. All of Rashida’s children were killed by soldiers, and every night she contemplates suicide.

3. The story after story of women systematically being put into groups of 5-6, and then repeatedly raped for a day by 10 soldiers. If these women lived through this brutality, they were lucky to wake up before the house around them burned down.

4. A place where 52 percent of the women have been raped.

Of all these atrocities, my mind is least able to process the slaughter of the Rohingya babies and toddlers.  It is clear the Burmese military had a systematic plan for surrounding villages, killing the men, and raping the women.  However, their actions varied from village to village in how they enacted psychotic rage against Rohingya babies.

At the same time, it is the slightly older four to eight year old brothers and sisters of these deceased babies who escaped to the fields, who renew my faith.

The swarms of young children who followed me around the camps have witnessed unimaginable atrocities over the past eight months, and yet they were so sweet, happy, and innocent.

These precious children are awe-inspiring. It is for their futures that this situation must immediately end, and we must ensure no children suffer this slaughter ever again.

Most of all, it is clear none of these refugees would be alive if the Bangladeshi government had not immediately opened their border to the surviving victims of genocide occurring to their east, when the Myanmar government began their latest killing spree on Aug25, 2017.

Many of the refugees who made it across the Bangladeshi border would not have survived their injuries if not for the volunteer doctors of organizations such as Doctors Without Borders.  As people poured in across the Bangladesh border, trauma victims were immediately whisked off for life-saving aid.

As a Christian, I am called to bear witness to these atrocities, and I am obligated to help these voiceless victims of genocide be heard.

I ask the world community: if our nations called for an end to genocide and crimes against humanity after World War II, how is this genocide occurring today in Myanmar?

Today the Myanmar government brags that they have eradicated 90 percent of the Rohingya population.

If we allow this to occur in Myanmar, how will we stop the next wave of genocide – there or anywhere else?

We cannot allow this injustice to continue.