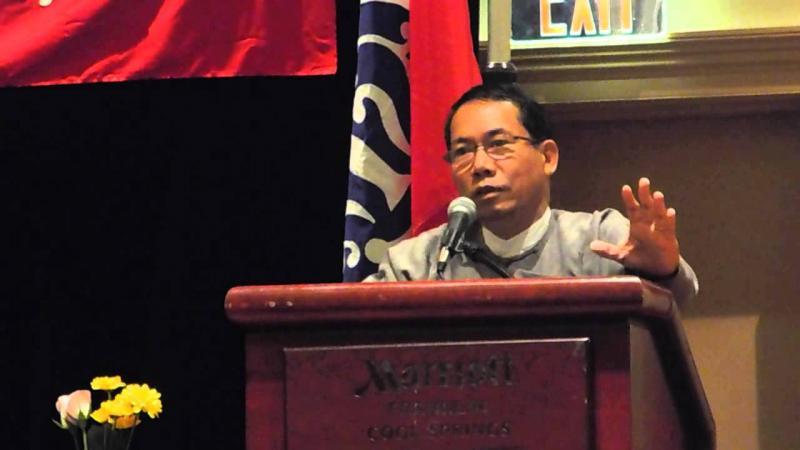 Aye Maung, a leader of the ANP or Arakan National Party is a virulently anti-Rohingya genocidalist who has been implicated in the 2012 pogroms and riots targeting the Rohingya Muslims. Maung won recent elections that were held on April 1st on an avowedly anti-Rohingya platform:

“Most of Aye Maung’s campaign speeches spoke about the history Rakhine State and the threat posed by “Bengali Muslims” in the north of the country, a reference to the Muslim minority who call themselves Rohingya.”

Who is Aye Maung and the ANP:

The Arakan National Party (ANP), is an ethno-centric party in the Burmese state of Rakhine that receives its greatest support from the state’s largest ethnic group, the Rakhine Buddhists. The ANP won 23 seats in the November elections against the 13 that the NLD won. The ANP is extremely xenophobic and has a specifically anti-Rohingya and Islamophobic platform. It refers to the Rohingya as “Bengalis,” and the derogatory term, “Kalar,” considering them “settlers” who are either “colonists” or “illegal immigrants.” The ANP and its leader, Dr. Aye Maung have been named as intigators in perpetrating violence against the Rohingya. In 2012 the ANP, then known as the Rakhine National Development Party declared in its magazine that,

“in order for a country’s survival…crimes against humanity or inhuman acts may be justifiably committed.”

“We will go down in history as cowards if we pass on these [Rohingya] issues to the next generation without getting it over and done with.”

2012 of course is the year that saw horrific pogroms and the internal displacement of Rohingya as Rakhine Buddhists attacked them with the support of the military, state and local political leaders of the ANP. Now, the ANP is demanding that the NLD, which won national elections appoint one of its members to be the chief minister of the state.

The ANP, which won the majority of seats in Rakhine, issued a statement Wednesday demanding that the NLD grant an exemption allowing the ethnic party to form its own government.

“Otherwise we won’t join any government organization, but will stand as an opposition party for the interests of Rakhine people,” ANP said in the statement.

Of the 48 seats in Rakhine’s regional parliament, the ANP won 23 seats and the NLD 13, while the military occupies 12 seats – or 25 percent – under the country’s constitution.

“The ANP won the majority in the state assembly. So, we deserve to govern our state,” Oo Hla Saw underlined.

After winning the Nov. 8 polls by a landslide, the NLD stated its intention to appoint its party members to the chief minister and top executive posts in regional governments as well as in the central government.

According to the military-drafted 2008 constitution, the president has the power to appoint chief ministers, who then appoint most cabinet positions, while the army chief has to assign three ministers in state governments.

The NLD nominated Wednesday an ethnic Rahkine lawmaker from the ANP and an ethnic Kachin from the incumbent military-backed ruling party as deputy speakers of the two houses of the national parliament, alongside two of its party members as their speakers.