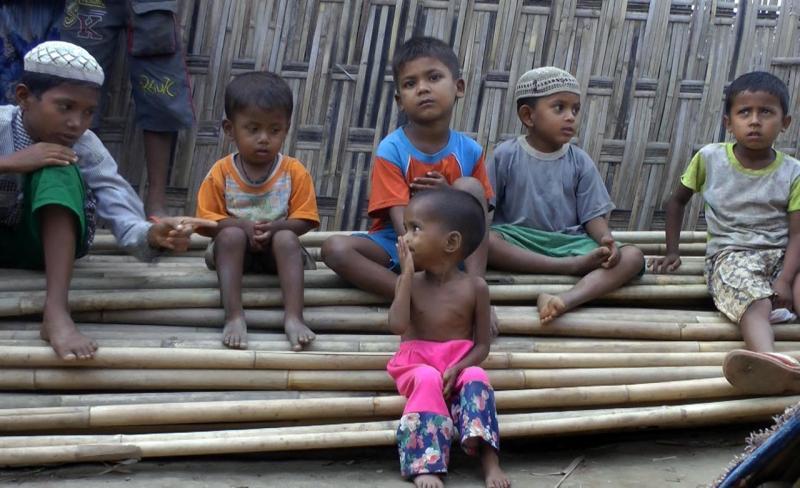 Five years after a genocidal wave of anti-Muslim violence forced more than 120,000 Rohingya Muslims into camps in the primarily Buddhist nation of Myanmar, the recently-elected government of Nobel Peace laureate Aung San Suu Kyi appears to have given up any pretense of trying to protect the Muslim minority. Among the victims of the systematic persecution of the Rohingya is Rosmaida Bibi, a tiny frail 4-year-old with big brown eyes, one of a multitude of Rohingya children suffering terribly from malnutrition in a camp that authorities refuse to let anyone leave. Barely the size of a 1-year-old, Rosmaida can hardly walk or even speak. Bones protrude visibly against the pallid skin of her chest.

“This is worse than a prison,” said Rosmaida’s 20-year-old mother, Hamida Begum, referring to the makeshift hut where her daughter was born. Told The Associated Press. “I want to give her an education. I want to send her to school like all the other kids. But it’s not possible because she’s so sick … she cannot grow.”

The Rohingya have long been denied citizenship, freedom of movement, and other basic rights in Myanmar. But Begum says that back at her former home in Sittwe, Buddhists and Muslims had managed to coexist peacefully. Then, on June 5, 2012, Buddhist mobs began attacking Muslims and burning their homes. Begum says she ran away barefoot, only realizing later that her feet had been badly bloodied during her escape. Today, with the exception of a single district, Muslims are banned from walking the streets of Sittwe.

Despite optimism after Suu Kyi’s party swept elections last year, Myanmar’s government has continued to condone persecution, and even “mass killing, mass rape, [and] widespread forced labor,” according to the advocacy group Fortify Rights. In response to an attack by a Rohingya insurgent group that killed nine officers in October, the government responded by burning entire villages, raping their women, and killing an unknown number of people as 75,000 Rohingya fled into neighboring Bangladesh, according to the United Nations. Myanmar’s government offers a differing account of events — according to the government, only 52 people went missing or died during the attacks, and only extremists carried out any killings.

A UNICEF report from May estimates that 150 children under the age of 5 die every day in Myanmar. But the U.N. lacks statistics from within the Rohingya camps, where aid workers say the situations is far worse — and where half of all inhabitants are children.

Watch video of the Rohingya camps below.

Read the full story at The Associated Press.