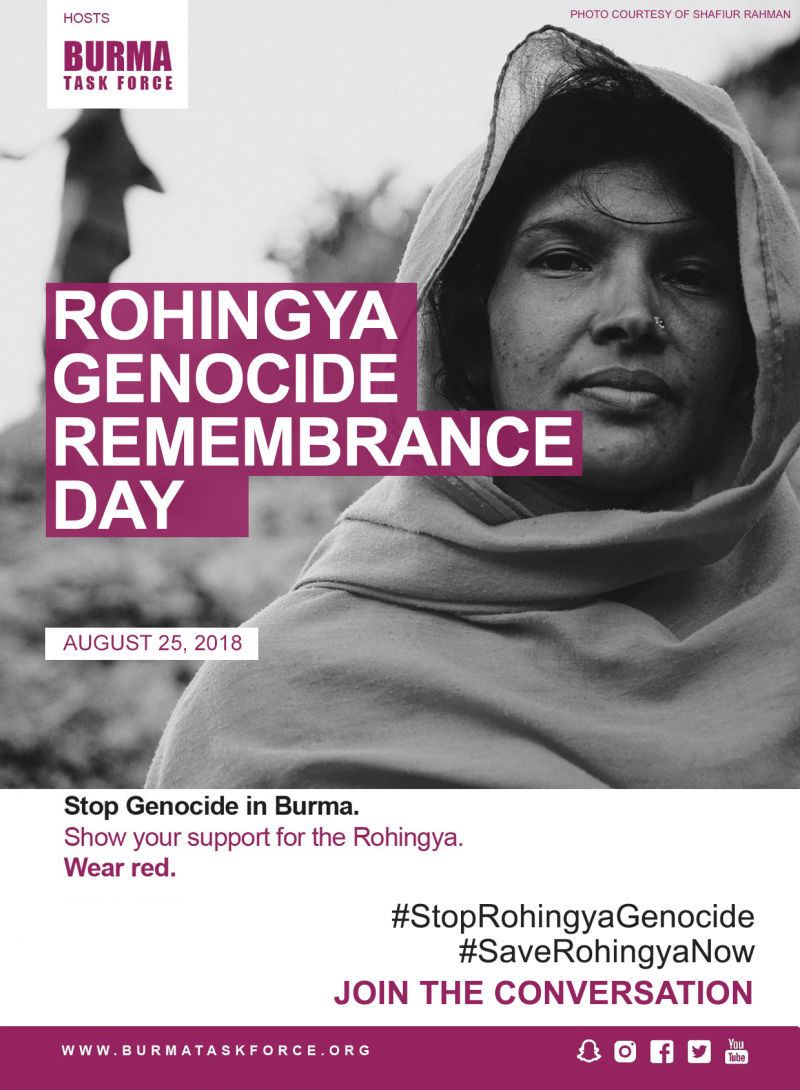 Brothers and sisters, we are approaching the 1-year anniversary of the massive, brutal attack on Rohingya Muslims in Rakhine that caused hundreds of thousands to flee for their lives into the refugee camps of Bangladesh.

Burma Task Force is organizing a national day of action for the Rohingya, in both the U.S. and Canada, that includes public programs to raise public awareness of the issue and generate support for a strong, serious response from the U.S. government.

In response to these abuses, more than 700,000 Rohingya fled to the Bangladesh, where they join hundreds of thousands of fellow refugees who have already sought refuge there. Now over a million Rohingya refugees languish in stateless limbo across the sprawling camps of southeastern Bangladesh.

For nine months, the world has stood and watched the horror that is taking place in Burma. For decades before this latest outrage, the Burmese government has victimized its own people. It is past time for it to be brought to an end. It is time to remind the world that injustice anywhere is a threat to justice everywhere.

Save Rohingya Day will engage key stakeholders in politics, the media, faith communities, and the general public to raise awareness about this critical issue. It will provide a platform to address concerned citizens about the persecution of the Rohingya in Burma and the critical situation of the genocide survivors. This event will also provide an opportunity to demonstrate to the American government that people of conscience everywhere are committed to stopping the persecution and genocide of the Rohingya, and bringing Burma’s genocidal regime to justice.

Please get in touch to find out how you can get involved to make Save Rohingya Day a success on August 25, 2018. If you are interested in inviting members of an organization or a local mosque to get involved, Burma Task Force can provide a form letter which you can use to invite them. Please get in touch at: info@burmamuslims.org.

IMPORTANT:
If you are working to plan a rally for your town or community, please visit this form hereand enter your organizational affiliation, time, and location information. Burma Task Force will send out a bulletin listing all planned rallies as August 25th approaches to help coordinate resources and maximize public awareness.

Here is the information for the currently planned rallies:

WASHINGTON, D.C.
US Capitol, near the Peace Monument Circle and Capitol Reflecting Pool