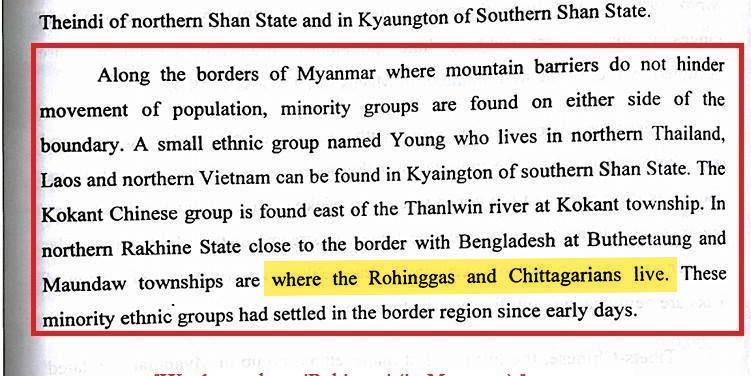 We must stop lying, as a people of Burma or Myanmar.  For nearly 40 years – since 1979, the country’s successive military leaderships from Ne Win (1962-88), Khin Nyunt-Than Shwe (1988-2004) and ThanShwe-TheinSein (2004-present) – have as a matter of national policy attempted to erase Rohingya from the country’s official history.

Apparently, some university researchers have professional integrity to state facts as they find them on the ground – rather than going along with the generals in power.

In the above-inserted pieces of photographic evidence, as late as 2012, Rohingya and Chittagonians are recognized as “ancient” people in their ancestral land along present-day Myanmar and Bangladesh – two post-World War II creations as new nation-states.

And yet President Thein Sein to Aung San Suu Kyi’s National League for Democracy to Buddhist monks and other dissidents have joined hands in butchering Rohingya identity and history:  indeed within Myanmar or Burma, Rohingya have been made a ‘people without history’ or identity.

As Myanmar or Burma peoples who claim to be Buddhist and demand basic human rights, we must have the courage and strength to admit our wrong-doings to the Rohingya and stop lying about their genuine history and identity.  Bluntly put, we are in effect a nation of ethnocidaires – killers of an ethnic identity, culture and history.

As a Burmese I find this most shameful, most despicable and most unconscionable.

Yes, I support student marchers demanding ‘education for democracy’.
Yes, I support the rights of minority or non-Bama ethnic groups to self-determine  their own future.
yes, I support land rights activists and displaced farmers.

But I want us as a people to STOP lying to ourselves and to the world.

Our country – Myanmar or Burma – is verifiably a  textbook example of an ETHNO-CIDE, destruction of ethnic identity and existence as an ethnic group.

It is not simply that the world recognizes the group’s right to self-identity as a matter of its human rights.

Equally important, Myanmar’s official knowledge – as in what goes into Ministry of Education textbooks – evidently recognizes Rohingya to be ancient or early people of Northern Arakan or Rakhine.