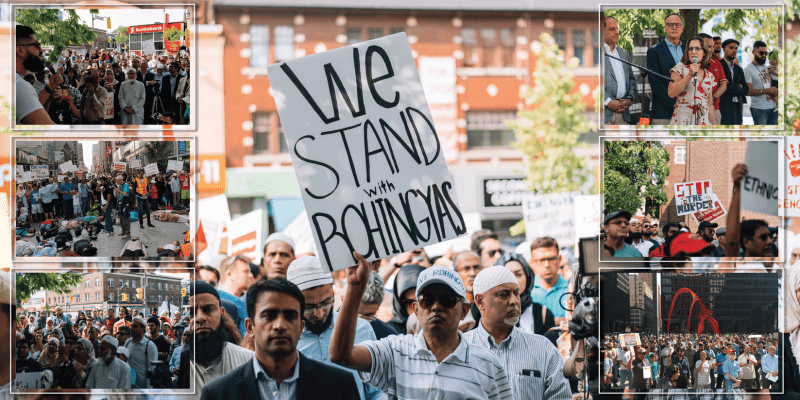 Burma Task Force has organized worldwide rallies and demonstrations in the past week demanding Myanmar stop its genocidal atrocities against Rohingya Muslims, demonstrators also called on their governments take urgent action to stop the violence. The protests were organized in response to a military-Buddhist militant combined operation that has forced half a million Rohingya Muslims to flee from their homes to Bangladesh since August 25, according to the UN. A further 400,000 are hiding from the military and Rakhine militants in nearby forests. The mass scale of the crimes include: killing, abduction, rape, forced disappearance, looting of their possessions and the burning down of whole villages.

Large protests were held in the United States and Canada. In Toronto, over 1,000 demonstrators were joined by Canada’s Minister of Foreign Affairs Chrystia Freeland and the Minister of Parliament Rob Oliphant. At the rally, Freeland said “based on the reports, this looks a lot like ethnic cleansing and that is not acceptable. It is not acceptable to Canadians and I am very proud that Canadians are raising their voices here in Canada.”

Freeland also said that Canada will seek access to the Rohingya areas.

Spearheading the protest, Outreach Coordinator for Burma Task Force Canada Ahmed Ramadan said, “While the media may pick up on the Rohingya genocide for a brief moment in time, given the multitude of tragedies and disasters facing our world today, we must not forget that this has gone on for the last 40 years and will need years of dedicated support, awareness building and international participation to restore the Rohingya as legally recognized citizens and residents of Burma. The importance of Canada’s pressure on the Burma government cannot be understated.”

On Saturday, September 16 Chicago held its largest ever protest against the Rohingya genocide with 1,300 demonstrators filling Federal Plaza. Speakers from the Council of Islamic Organizations of Greater Chicago which represents 60 mosques across Chicago, CAIR-Chicago, Rohingya Cultural Center and Buddhist leaders spoke out against the genocide and called on demonstrators to support Senate resolutions 250 and NDAA Amendment 607 which cut aid to, and condemn Myanmar’s military.

Speaker Imam Tariq El-Amin told the protesters that “we are witnessing genocide and will be held accountable if we don’t speak out.”

In London protesters urged rapid action to stop genocide of the Rohingya in Arakan and stop restriction of aid. Maung Zarni, a scholar and Burmese dissident who co-organized the rally commented that the protest was “to tell the world that Rohingya are not terrorists… they are our own people… and that the Burmese military adopted anti-Muslim and racist policies against the Rohingya. I am here to tell the British government that they have blood on their hands because they are training the killer military, they are supporting Aung San Suu Kyi.”

In Asia massive protests took over the cities of Indonesia, Malaysia, Bangladesh, India, Pakistan, and Chechnya and were covered in international media outlets such as CNN. There was quite of bit of anger and similar demands for an end to the genocidal violence against Rohingya. Many protesters noted the double standard in the silence of world institutions and leaders when it comes to Muslims being persecuted.