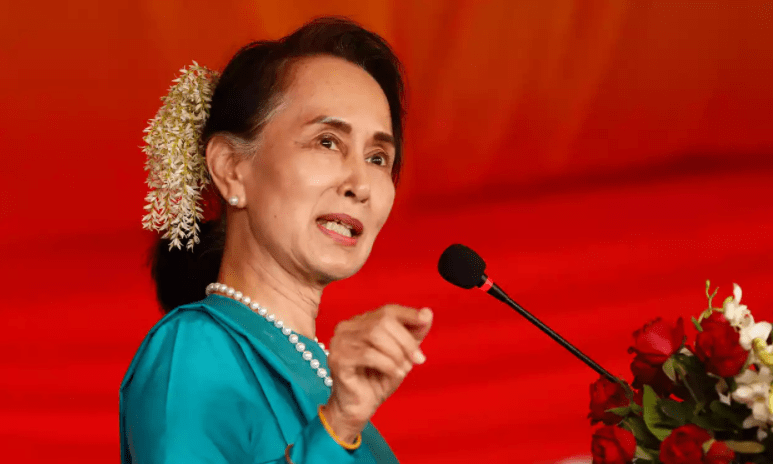 Aung San Suu Kyi cannot face prosecution for crimes against humanity while in Australia because she has immunity, the attorney general Christian Porter has said.

The Guardian reported on Saturday morning that five Australian lawyers, including a former federal court judge, had filed a private application in the Melbourne magistrates court seeking prosecution of Aung San Suu Kyi over crimes against humanity committed against the Rohingya ethnic and religious minority in Myanmar.

More than 650,000 Rohingya have crossed the Myanmar border to Bangladesh since August, fleeing systemic violence from the country’s military, including murder, rape, and the deliberate torching of villages. The UN has said the persecution “bears all the hallmarks of genocide”.

Following the application, Porter told the Guardian a prosecution case against Aung San Suu Kyi could not proceed.

“Aung San Suu Kyi has complete immunity, including from being served with court documents because under customary international law, heads of state, heads of government and ministers of foreign affairs are immune from foreign criminal proceedings and are inviolable – they cannot be arrested, detained, or served with court proceedings.”

As state counsellor, Aung San Suu Kyi is the not the head of state of Myanmar – that position is held by president Htin Kyaw – but she is the de facto, if not de jure, leader of the government. She is also foreign minister, a position that attracts immunity.

Aung San Suu Kyi, the de facto leader of the Myanmar government, is accused in the application of crimes against humanity for the deportation or forcible transfer of a population.

A statement from the legal team said there was “widespread and credible eyewitness reports … of extensive and systematic crimes against the Muslim Rohingyan population by the Myanmar security forces, including extra-judicial killings, disappearances, violence, rape, unlawful detention, and destruction of property and whole villages. Ms Suu Kyi has denied these events have occurred”.

“It is alleged that Ms Suu Kyi has failed to use her position of authority and power, and, as such, has permitted the Myanmar security forces to deport and forcibly remove Rohingya from their homes.”

The prosecution application relies on the principle of universal jurisdiction, reserved for the most serious criminal offences under international law, such as genocide, war crimes, and crimes against humanity.

Australia formally recognises the principle of universal jurisdiction, giving Australian courts jurisdiction to hear allegations of the most serious international crimes, regardless of the nationality of the alleged offender, or the place of the commission of the offences.

But, in Australia, a universal jurisdiction prosecution requires the consent of the attorney general to proceed.

Aung San Suu Kyi – the 1991 Nobel peace laureate but whose public image has been tarnished by her unwillingness to publicly condemn military atrocities against the Rohingya – is visiting Australia as part of the Asean Australia special summit, hosted by the Australian government in Sydney.

She met the prime minister, Malcolm Turnbull, on Friday, and before the meeting he had said he would raise the issue of Rohingya persecution with her.

Aung San Suu Kyi has spoken little about the Rohingya crisis in Myanmar’s western Rakhine state – pointedly refusing to use the word Rohingya. In a speech last September, she said the latest violence in Rakhine was sparked by attacks on military outposts.

“It is not the intention of the Myanmar government to apportion blame or to abnegate responsibility. We condemn all human rights violations and unlawful violence.”

The UN said this week that the systematic persecution of the Rohingya ethnic and religious minority in the western Rakhine state bore “the hallmarks of genocide”.