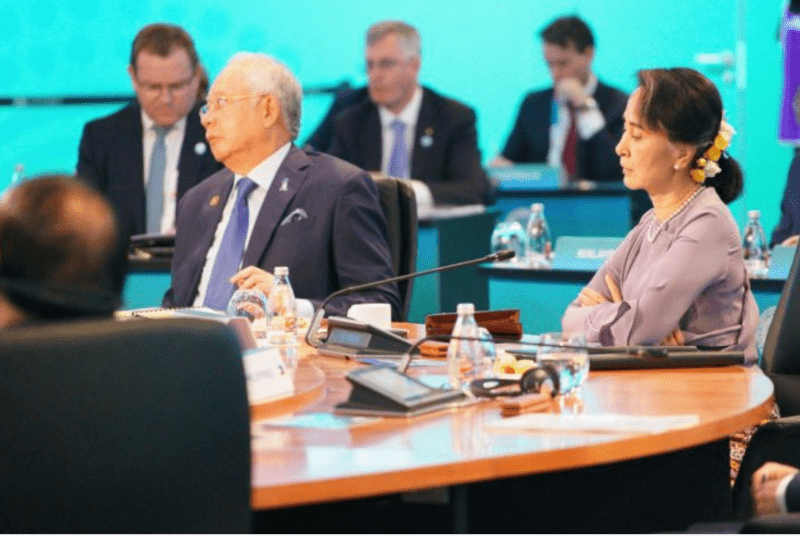 Najib Razak made the deliberate intervention during a speech on counterterrorism at the special Australia-ASEAN summit in Sydney.

The United Nations has accused Myanmar of overseeing a campaign of ethnic cleansing against Rohingyas in the country’s north.

More than 600,000 Rohingyas have been forced out of Myanmar and into squalid refugee camps in Bangladesh.

Mr Razak said the “suffering” and “displacement” of Rohingyas made them vulnerable to radicalisation by terrorist groups, because they had no hope for the future.

“The situation in Rakhine state in Myanmar can no longer be considered a purely domestic matter,” he told ASEAN leaders.

Mr Razak said Malaysia wanted to see a “just and durable solution” to the disaster.

Myanmar is hugely sensitive to any external criticism of its actions in the Rohingya crisis, and Mr Razak’s pointed comments — delivered while Aung San Suu Kyi was sitting on the stage — will be interpreted as a strong rebuke.

Rohingya Muslims joined protests in Sydney yesterday to demand that Australia and ASEAN strongly condemn the violence in Rakhine state.

But most observers still expect ASEAN to avoid directly criticising Myanmar about the plight of the minority group.

Ms Suu Kyi will stay in Australia after the summit on a formal visit.

Prime Minister Malcolm Turnbull has not publicly criticised Ms Suu Kyi in the lead up to the summit, but made it clear he will raise the Rohingya crisis with her privately when they meet in Canberra next week.

Ms Suu Kyi will also give a much-anticipated speech at the Lowy Institute in Sydney.

Some activists have already vowed to confront Ms Suu Kyi during the event.