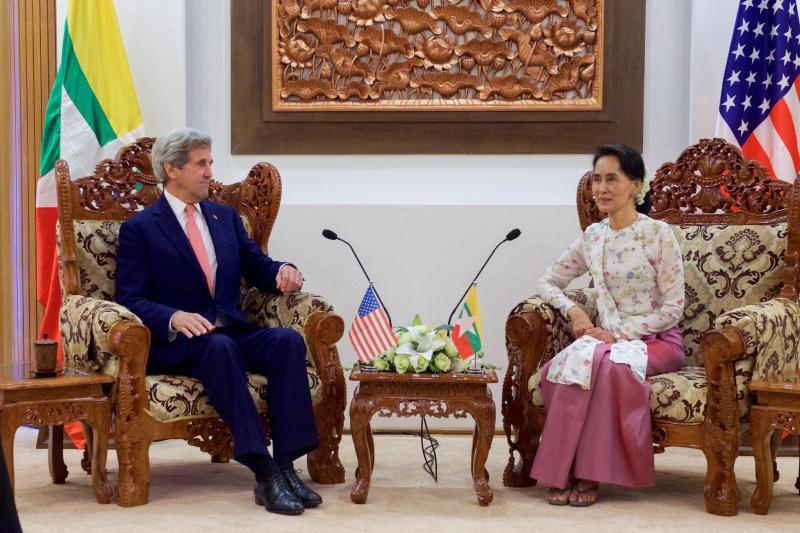 In a recent press conference with US Secretary of State John Kerry, Aung San Suu Kyi, was forced to address the Rohingya issue. Up until then she had been conspicuously silent on the matter, her views were ambiguous and punctuated by an advisory sent from the Burmese Foreign Ministry she leads to foreign ambassadors “not to use the term Rohingya.” As we know this advisement was sent out after Burmese Buddhist nationalists held anti-Rohingya protests, demanding the name not be used. Suu Kyi caved to the extremists, lending more credence to the belief that she is either unwilling or incapable of repulsing the rampant hate perpetrated by fear mongering monks and their followers.

At the press conference Suu Kyi asked for more “space” to resolve the issue, but she also reiterated that the name Rohingya not be used since it is “emotive.” She differentiated herself from the hardliners by stating that the Rohingya should also not be called “Bengali.” Bengali is used derogatively by anti-Rohingyans to imply that Rohingya are illegal immigrants who came from Bangladesh. Other terms that she could have spoken out against include the racist use of “Kalar,” a term analogous to “n*****,” a part of everyday nomenclature and hurled in a dehumanizing fashion at Muslims. Questions remain after the press conference: if Suu Kyi is truly interested in tackling the issue, why is she caving into the demands of extremist nationalists? Why did she bar any Muslims in her National League for Democracy (NLD) party from running in the 2015 elections? Why has her party stated that the Rohingya issue is “not a priority?” These questions will continue to plague Suu Kyi until she makes substantive moves to quell the doubt that her actions have fostered.

This week, the NLD announced the creation of the The Central Committee for Implementation of Peace and Development in Rakhine State, which Suu Kyi will chair. The committee’s goal is to achieve “more stability and development” and will consist of 27 individuals, all of whom are either government cabinet members or Rakhine state representatives. This means that the committee will likely not have a single Muslim or Rohingya representative. Compare this with the 1949 creation of a Peace and Reconciliation Committee which had three Rakhine and three Muslim members; it would seem we are going backward. The fact that there is no Rohingya or Muslim representation is a serious cause for concern. Without any representation who will speak for them and their rights? Is Suu Kyi’s creation of the committee simply a way to deflect the criticism she has faced for the callous approach her government has taken so far? Social media reports among Rohingya activists have shared a video, which claims the committee has visited the MyayBon IDP camp, and “promised to do their best for the Rohingya.”

Thankfully there are more ways that Suu Kyi and the NLD can use their mandate to immediately address the Rohingyan plight and Rakhine grievances. One of the methods to achieve greater societal harmony and marginalize the voices of extremist hate is to capitalize and build on already existing relationships between Buddhists and Muslims. Organizations and individuals working to bring Rohingya Muslims and Rakhine Buddhists together online and on the ground are making in-roads.

Burma is a deeply religious and diverse society made up of hundreds of different ethnicities, speaking as many languages. The majority of the population, close to 80% follows Buddhism, while both Islam and Christianity together combine to make up 12% of the population. The rest of the populace consists of practitioners of the indigenous folk religions of Burma, as well as followers of Hinduism. Historically, its communities have coexisted with each other in relative peace and harmony. However, British colonialism sowed the seeds of conflict through imperialist divide and rule policies that pitted communities against one another. Since the founding of the post-colonial Burmese state, violent conflict, repression and persecution have characterized its internal relationship with minorities.

For most of the world, the power of religion in Burma was exemplified by the prominent role of Buddhist monks protesting against the military regime for a return to democratic rule in the nation. The protests were dubbed the “Saffron Revolution” in reference to the traditional color of the robes worn by Burma’s Therevada Buddhist monks. From daily prayers and rituals to the expectation that “Buddhist men in Myanmar will spend periods in monkhood,” Buddhism is a part of daily life in Burma.