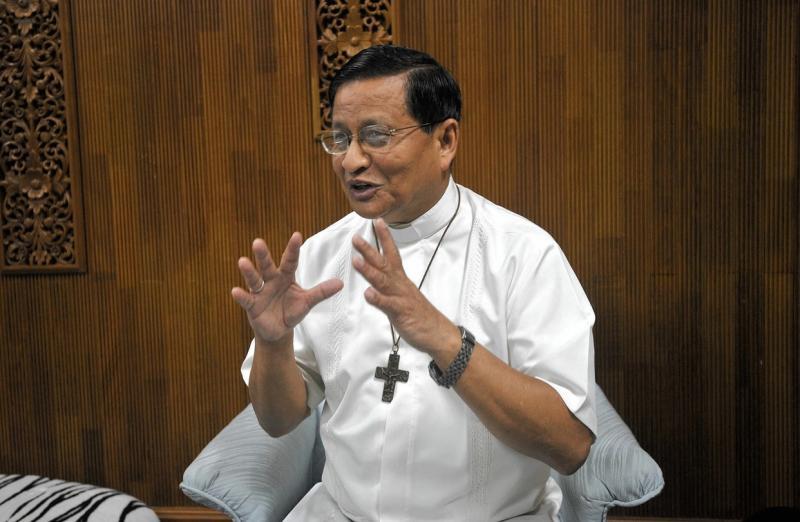 It is remarkable that such a diverse nation as Burma did not have a Cardinal until February 15, when Pope Francis consecrated Charles Maung Bo as Cardinal, making him the first Catholic Cardinal of Burma. Cardinal Bo is heading the Burmese Catholic Church at a crucial moment in time: at the same time that a “transition” to democracy is under way, ethnic minorities continue to face state sanctioned violence and persecution.

Cardinal Bo has not shirked his duties but has spoken out in defence of justice and peace in the country. He notes the difficulties and violence used by the government against Christiand but also speaks up about the plight of the Rohingya.:

“Freedom of religion or belief … is perhaps the most basic, most foundational human right of all,” he said. “True peace and real freedom hinge on an issue that has yet to be addressed: respect for Myanmar’s ethnic and religious diversity … Without the freedom to choose, practise, share and change your beliefs, there is no freedom.”

“The majority of the Kachin, Chin, Naga and Karenni peoples, and a significant proportion of the Karen, are Christians – and over the decades of armed conflict, the military has turned religion into a tool of oppression,” he said. “In Chin State, for example, Christian crosses have been destroyed and Chin Christians have been forced to construct Buddhist pagodas in their place. Last year, two Kachin Christian school teachers were raped and murdered. At least 66 churches in Kachin state have been destroyed since the conflict reignited in 2011.”

The Cardinal also highlighted the plight of the Rohingya Muslims, whose struggles he called “an appalling scar on the conscience of my country”.

“They are among the most marginalised, dehumanised and persecuted people in the world. They are treated worse than animals. Stripped of their citizenship, rejected by neighbouring countries, they are rendered stateless. No human being deserves to be treated this way,” he said. “Without [a solution], the prospects for genuine peace and true freedom for my country will be denied, for no-one can sleep easy at night knowing how one particular people group are dying simply due to their race and religion.”