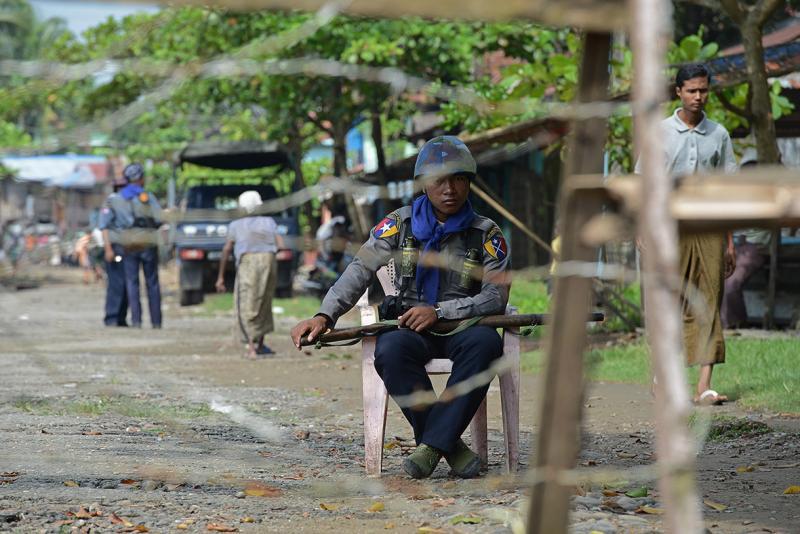 Only 4,000 Rohingya remain in the Aung Mingalar quarter in Sittwe, a neighborhood in which 15,000 Rohingya used to live in relative peace and comfort until the pogroms against their community turned their lives upside down. Aung Mingalar has since been described by visitors and observers as a “Muslim ghetto,” “an open-air prison” with Rohingya being “barricaded” inside. The Rohingya who live in Aung Mingalar have many restrictions imposed upon them: they are not allowed to move in and out without permission from the guards, barbed wire covers the boundaries of the quarter, and guards toting shotguns patrol the quarter.

Because Aung Mingalar is not considered an IDP camp they do not receive the already paltry government food rations that other displaced persons are entitled to. Outside of Aung Mingalar, a hostile Rakhine Buddhist population continues to intimidate and threaten Aung Mingalar residents. Aung Mingalar has been the subject of rumors spread by nationalists who continue to use the Rohingya as a convenient scapegoat to distract Rakhine Buddhist from the very real social and economic issues they face and which have been exacerbated by military regimes for decades.

Even though the population of Aung Mingalar’s Rohingya is a quarter of what it used to be, the nationalists have spread rumors that the Rohingya inside are not only receiving special treatment but their numbers are also increasing. This points to the vicious attitude of Rakhine nationalists whose aim has been to reduce and completely expel the Rohingya population of Aung Mingalar. In 2013, Rakhine complaintants claimed that there were 10,000 Rohingya in Aung Mingalar based on the fact that a government run health program in the ghetto “had documented treatment of more than 10,000 people last year.” The government denied these claims. A Rohingya resident of Aung Mingalar described the complaints as a product of the “suspicious minds” of their neighbors and an attempt “to spread rumors.”

It appears these rumors are once again surfacing and spreading across the region.:

“Contrary to rumours reportedly sweeping Sittwe, the capital of Rakhine State, the number of Muslims living in Aung Mingalar quarter is actually falling, immigration officials say. A headcount, undertaken this past weekend in response to heightened tensions surrounding the enclave, has found barely 4000 residents, down from 4304 a few months ago and more than 4500 counted after violence erupted throughout the state in 2012.”