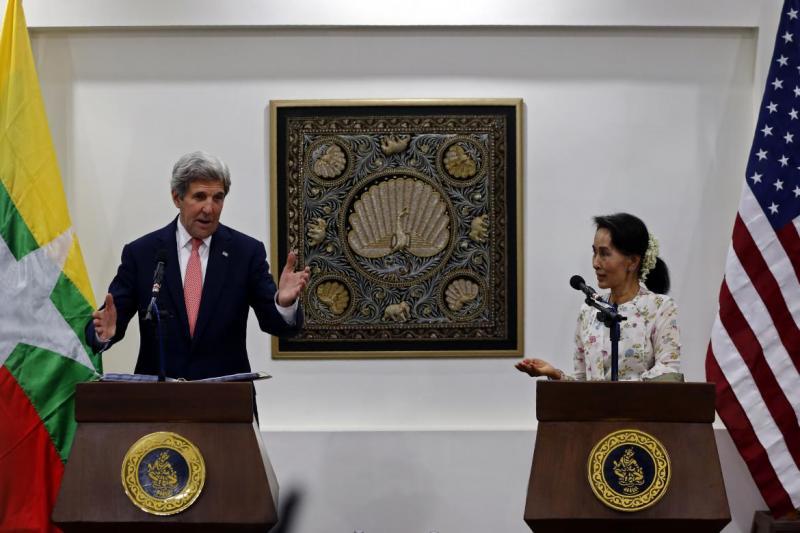 Secretary of State John Kerry met with Aung San Suu Kyi on May 22 and both held talks about US-Burma cooperation, including pressing issues relating to human rights, the persecution of the Rohingya and of course economic development and investment. Burma Task Force and its supporters called on Secretary of State John Kerry to emphasize the importance of prioritizing human rights with respect to minorities and also to continue the US policy of publically and officially using the name “Rohingya,” and not to cave into the demands of ultra-nationalists to refer to the Rohingya as Bengali.

In this sense the call by Burma Task Force and other human rights organizations was heeded as Kerry, in defiance of the extremist Buddhists, said:

“The name issue is obviously very sensitive, and she’s just spoken to sensitivity. It’s divisive, and I know that it arouses strong passions here. At the same time, we all understand, as a matter of fact, that there is a group here in Myanmar that calls itself Rohingya. We understand that. And we use that term ourselves sometimes. But what the minister and I talked about today is very much in line with what she has just said, and that is that what’s critical to focus on is solving the problem; what’s critical to focus on is improving the situation on the ground to promote development, promote respect for human rights, and to benefit all of those who live in Rakhine and throughout Myanmar.”

This is a good step and one that likely influenced Suu Kyi to break her silence on the Rohingya for the first time.:

“Well, what we want to do is avoid any terms that (inaudible) go too far. I wasn’t talking about one particular term. I was talking about all the terms that are incendiary and which create greater divisions between our peoples in the Rakhine and, of course, elsewhere too.

Now, the reason why I say that we’ve got to be very firm about not using emotive terms is because emotive terms make it very difficult for us to find a peaceful and sensible resolution of our problems. There are two terms which are emotive, and we’ve got to face them fairly and squarely. The Rakhine Buddhists object to the term “Rohingya,” just as much as the Muslims object to the term Bengali, because these have all kinds of political and emotional implications which are unacceptable to the opposing parties. All we are asking is that people should be aware of the difficulties that we are facing and to give us enough space to sort out our problems. If there is an insistence on other part – either on the part of the Rakhine Buddhists or on the part of the Muslims to insist on particular terms, knowing full well that these will create more animosity, this does not help to our finding a resolution to the problem at all.”

While Suu Kyi’s answer is less than satisfying (what alternative does she propose?), the one positive is the separation she creates between herself and the ultra-nationalist discourse of Bhuddist and Rakhine extremists who insist on referring to the Rohinga as “illegal Bengali immigrants.” This message is largely for the consumption of the West and fits Suu Kyi’s pattern of attempting to appease all parties, as has been noted by observers of Burmese politics, Suu Kyi’s own base of support and even members of her party are filled with anti-Rohingya Bhuddist nationalists.

Suu Kyi also equivocates in the sense that she makes the conflict between the Rakhine and Rohingya appear to be one in which both sides share blame or are on an equal footing when it comes to the perpetration of violence. In fact, the Rohingya face systemic abuse beyond what they are called, though denial of identity is one of the aspects of genocide. As stateless peoples they live by the hundreds of thousands in impoverished IDP camps, continue to face violence and state sanctioned bigotry from politicians, media figures and extremist organizations, and under the shadow of discriminatory laws that regulate who they can marry, the number of children they can have, and conversion.