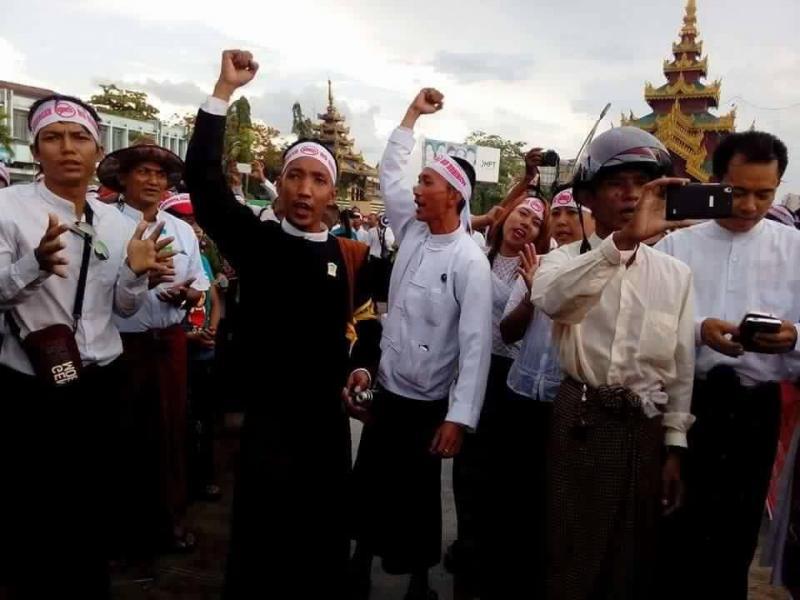 The three-hour demonstration in the heat of the afternoon brought hundreds to Shwe Maw Taw Pagoda in Pathein. Over 90 monks and nuns also participated, according to demonstration organisers and locals.

The nationalist camp has been in a fervour over the official terminology for a Muslim group in Rakhine State that self-identifies as Rohingya since a US embassy statement issued last month. The statement expressed condolences for Rohingya – who are referred to as Bengalis by those who prefer to characterise the group as illegal immigrants.

The previous government used “Bengali” as the official term, while State Counsellor Daw Aung San Suu Kyi has asked the US embassy to refrain from using the word “Rohingya”, she has not stated what should be used instead.

Yesterday’s protesters demanded clarity and pressured the government to denounce the Rohingya.

“Today we marched and shouted our demand, that those who call Bengali people Rohingya are known as our enemy,” said U Wai Yan Aung, a demonstration organiser and a member of an Ayeyarwady nationalist group.

The demonstration was led by the Yangon-based Myanmar Nationalist Network and Buddhist group Ma Ba Tha, also known as the Committee to Protect Race and Religion.

A Pathein township police officer said the demonstration was applied for and permitted.

Protest leaders estimated a turnout of close to 1000 supporters, but according to locals most of the people appeared to have come in from out of town.